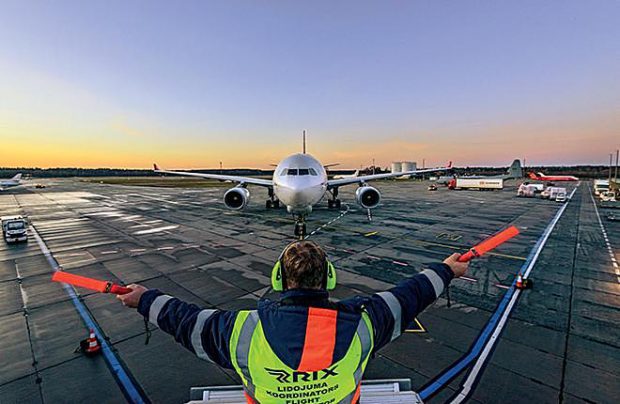 RIX has set a target to handle up to 50,000 tonnes of freight per year (Riga Airport)

Riga International Airport (IATA code RIX), the largest airport of the three Baltic states, which handled 6.09 million passengers last year, almost half of the total traffic in the region, has announced plans to achieve leadership in the freight segment as well.

By launching a new logistics centre, whilst also creating a more attractive, commercially competitive environment for specialist cargo carriers and freight forwarders, the airport is hoping to double its annual airfreight traffic throughput.

Initially, the cargo business at Latvia’s capital airport was invigorated by its key role in the transit of non-tactical supplies for NATO’s International Security Assistance Force (ISAF) to Afghanistan in 2013 and 2014, Artūrs Kokars, Riga Airport’s advisor to the board has revealed to Russian Aviation Insider’s sister publication ATO.ru.

Prior to this development, the ambitious airport, which at the time was aggressively developing into an international passenger hub, had not envisioned the cargo business, but the NATO programme helped the airport to build up its experience in the handling of wide-body freighters, such as the Boeing 747F, in a learning curve which has since inspired the new strategy in this segment.

In another significant enhancement, in 2014 the airport’s infrastructure was dramatically improved through the installation of an underground hydrant refuelling system equipped with 15 outlet points, a project which was financed by RixJet, one of the local aviation fuel suppliers. “This centralised refuelling system provides for the refuelling of heavy aircraft in the shortest possible time,” the spokesman emphasises. “Whereas fuel trucks can usually take three to four hours to inject 100 tonnes of fuel, the hydrant system can do it in 30-40 minutes. Our records show that the ground handling of one aircraft, including loading and unloading, can take on average between 1.5 to three hours, a good indicator for a cargo airport.”

Almost half of the entire freight traffic currently passing through Riga is carried in the bellies of scheduled passenger aircraft, with Latvia’s leading airline airBaltic responsible for nearly 30 per cent of this. The remainder is shared between international express delivery companies such as DHL, UPS, TNT, FedEx, as well as some charter carriers, which operate a range of different aircraft from regional turboprops to Boeing 757s. There is also Latvian RAF-avia, a small freight charter airline headquartered in Riga, but which operates mostly outside of the Baltics.

Last year marked the successful launch of a partnership between the local national post operator Latvijas Pasts and Chinese e-commerce giant Alibaba, with cargo shipments from China streaming through Riga to non-EU countries. “We have achieved quite a high efficiency in handling such business,” Kokars notes. “In less than six hours after landing, the last kilogram of cargo leaves the airport. So we have really compressed the timeline to record levels.”

Another significant cargo milestone for the airport was the 2017 launch of scheduled Turkish Cargo freighter services linking Istanbul and Riga. The Turkish airline’s cargo division’s plan was to provide fast-track deliveries for cargo between the Baltic region and the Far East of Russia, as well as to destinations in Africa, the Middle East, Uzbekistan, Kazakhstan, Kyrgyzstan and Turkmenistan. The twice-weekly flights were operated using an Airbus A330-200F, with a payload of 68 tonnes, and within a short period of time the amounts of cargo the new services attracted reached profitable levels.

“We were initially concerned that there might be insufficient volumes of export goods, but that segment has become even larger (at 55 per cent of the total volume) than imports,” the spokesman reveals. “This is also an indication that the economies in the Baltic States and Latvia in particular is coming alive.”

Another concern was that the large specialist freight carrier would ‘steal’ business from smaller local rivals, but Kokars says the airport has noticed the opposite effect. The Turkish airline’s market presence has in fact attracted larger volumes of transit cargo from across the Baltic and Scandinavian region’s countries and, as a result, all operators have enjoyed traffic growth. Finally, the airport benefited from both the Turkish Cargo and Chinese e-commerce projects, as illustrated by its 29.2 per cent year-on-year freight traffic increase at the end of 2017, when it handled 25,500 tonnes, some 51 per cent of the entire airfreight market of the Baltic region. Disappointingly, after only nine months of operations, in April 2018, Turkish Cargo decided to terminate its flight programme in Riga and instead relocated its Baltic freighter services to Vilnius, Lithuania. However, suitably experienced in such projects, RIX is now confidently evaluating alternative proposals from other specialist cargo operators. Turkish Cargo managed to generate new transit freight traffic flows from and to the Baltic and Scandinavian countries, but disappointingly decided to terminate its flight programme in Riga, after only nine months of operations (Riga Airport)

Overall, Riga Airport’s target is to double its cargo traffic to 50,000 tonnes by 2025. But such a boost in cargo volumes requires significant ground infrastructure upgrades. Next year the airport intends to invest its own funds in the construction of a dedicated cargo ramp, with parking spaces for up to three Boeing 747F-sized aircraft. It is also working on raising private investment funds for the erection of a modern logistics complex on the airport’s premises, one that is suitable for several freight companies. Kokars is confident that this move is a prerequisite for a more competitive pricing environment, both on the part of the airport and for its forwarders.

“The airfreight market is particularly sensitive to two factors: costs and handling times,” the airport representative explains. “So those are the key issues we are addressing – shorter aircraft manoeuvring distances, and reduced turn-around times. If we manage to provide efficient and inexpensive infrastructure, our prices will be competitive,” he adds.

Construction of the logistics complex is scheduled to begin in 2019, and it is expected to become operational in early 2020. The urgency for the new facility is dictated primarily by Riga Airport’s involvement in a large-scale national transport infrastructure initiative called Rail Baltica. As such, a railway linking the Baltic States with western Europe will also connect the airport with downtown Riga. But its construction requires the demolition of one of two existing cargo hangars.

In the meantime, there is another infrastructure possibility on the airport’s horizon: the construction of a cargo terminal by DHL, a project which is still under negotiation, but one for which the airport hopes to sign the contract before the end of this year.

Despite all of these exciting local and regional developments, it is Asia that possibly holds the greatest potential for the airport’s cargo business, Kokras believes. That is why he is keeping an eye on the joint Sino-Belarusian logistics project some 25 km from Minsk, which is being backed by the China Merchants Group. Although this particular project’s prospects for the Belarusian side are still somewhat vague, Kokars says he is taking the opportunity to become acquainted with it. “In a couple of years, if this place really becomes a centre of trade connecting China, Russia and Europe, then we certainly want to have our share of the new traffic generated by this project,” he concludes.