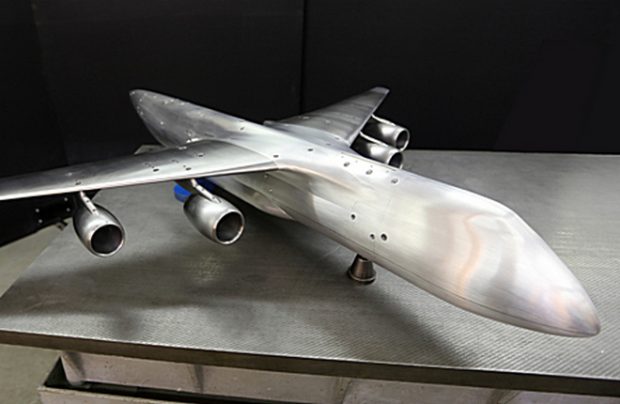 The 120-kilo model representation of Slon, which is about 1.63 metres long, 0.5 metres high and has a wingspan of almost 1.75 metres, will first be tested in a variable-density wind tunnel (TsAGI)

Russia’s Central Aerohydrodynamic Institute (TsAGI) has published an image of Slon (Elephant), the country’s proposed advanced super heavy transport aircraft which, it is hoped, will eventually supersede the iconic Antonov An-124 heavy lifter. The scientific institute has created an aerodynamic representative model of the new aircraft and is preparing for wind tunnel testing, according to the official statement.

The new aircraft is being designed to outperform the Ruslan’s useable 120-tonne load capability by 60 tonnes and is intended to be capable of transporting super heavy and outsized freight over a range of some 7,000 km at a speed of 850 km/h. Similar to the Ruslan, the advanced aircraft would require a 3,000-metre runway for take-off.

Slon, which will be powered by four Aviadvigatel PD-35s, Russia’s advanced high bypass turbofans, is being developed under contract with Russia’s industry and trade ministry. The engine is intended to also power the proposed Russo-Chinese CRAIC CR929 wide-body jet.

Having defined the aircraft’s concept and designed its base structure, TsAGI has now built a 120-kilo replica model that is 1.63 metres long, 0.5 metres high and has a wingspan of almost 1.75 metres. The scale model is also reconfigurable, so that it can be tested in different configurations and also offers modification options for changing aerodynamic features including the shape of the nose and tail cones, winglets and landing gear fairings.

Testing of the Slon exemplar in a T-106 variable-density wind tunnel is the first task on the list and will start shortly. TsAGI experts will study the model’s aerodynamic performance in cruise flight modes. A programme of further T-106 testing, as well as T-102 tests (two reverse channels), is scheduled for 2020. These will include testing of the model’s take-off and landing performance. The institute will also run a visualisation of airflow characteristics around the model.