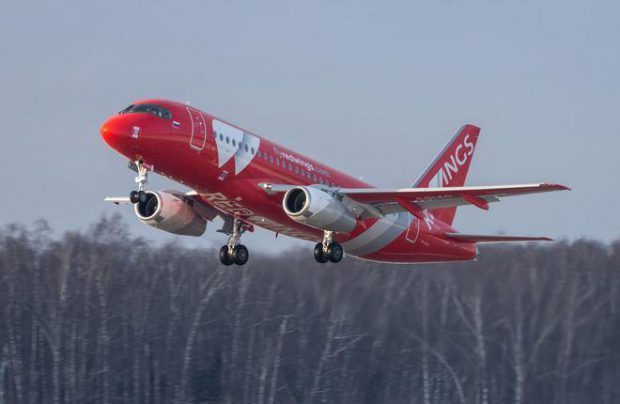 Despite obvious excess of available capacities and a full-fledged crisis still plaguing the air travel market, Russian state-owned airline Red Wings intends to grow its fleet from the existing 19 to 39 aircraft within this year, by adding 12 Russian-made Superjet 100s, five Airbus A320s and even three Boeing 777s.

Red Wings’ general director Evgeny Klyucharev shared his airlines’ fleet expansion plans while taking delivery of the fourth Superjet 100 at Moscow’s Domodedovo airport on December 29, 2020. The airline, which is owned by SSJ100 manufacturer United Aircraft Corporation (UAC), was selected to serve as a ‘benchmark SSJ100 operator’ in May 2020. Its fleet of Russian-made regional jets is poised to be increased to 16 units by the end of this year. These aircraft will be based at the airline’s evolving regional hubs, primarily at Yekaterinburg’s Koltsovo airport. This plan is somewhat short of the initial delivery schedule, which would see the airline accepting up to 30 SSJ100s – reportedly ‘white tails’ assembled for no particular customer – before the end of 2021. The project is heavily backed by the state – in the form of leasing discounts, operational reimbursements and subsidized routes.

Introduction of SSJ100s into Red Wings’ schedule and launch of the airline’s ambitious regional project was marked by a steep decline in the airline’s operational performance. Whilst in September 2020 Red Wings carried 309,000 passengers, down just 19 per cent on the pre-crisis 2019 levels, with seat load factor of 83 per cent (down 10.1 percentage points year-on-year), in November traffic reduced by 70.8 per cent on the same month of 2019. The airline served just 51,000 passengers with the seat load factor plunging to 65.8 per cent (down 19.7 p.p. on November 2019). The decline pressed Red Wings out of the TOP-10 ranking of Russia’s largest airlines, whilst it descended from its ninth position to 15th.

This may be a rationale behind Red Wings’ decision not only retain its trusted fleet of 15 Airbus A320 family aircaft, the type associated with the airline’s most successful years, but to rely on Western-build aircraft for fleet expansion. According to Klyucharev, Red Wings plans to bring in five more A320s during 2021. Reportedly, at lease several of these new deliveries will be neos.

Besides, Red Wings confirmed surprising plans to launch operations of widebody Boeing 777s. Three of these aircraft are preparing to join the airline’s fleet as early as January – all three (registration numbers VP-BMR, VP-BSJ и VP-BLI) were previously – financially unsuccessfully – operated by the now defunct VIM Airlines, and later by IrAero.