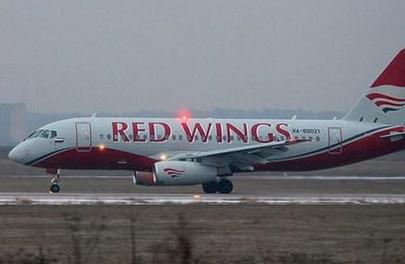 “The aircraft’s producer, SCAC, now acknowledges us as the best operator of the type in the world,” Red Wings’ general director Evgeniy Klyucharev boasted during a press-conerence in Moscow. “We have a more intense fly schedule than the Mexican Interjet, and along with that we have reached better level of operational availability and reliability,” he explained. In August an average aircraft flight time reached 287 hours, in September – 276 hours. However, the figure was lower in October, because the aircraft went in for base maintenance, Klyucharev admitted.

Red Wings is currently working with Sukhoi Civil Aircraft (SCAC) on further modifications as one of the type’s leading operators. The airline is planning to double its SSJ100 fleet within next year under the contract with State Transport Leasing Company signed at Moscow Air Show MAKS-2015. A Letter of Intent implies an order for 15 SSJ100s to be delivered between 2015 and 2017.

The carrier, which also operates eight Tupolev Tu-204s, is in negotiations with the Ilyushin Finance Company over three Tu-214s, previously operated by Transaero and now reclaimed by the lessor. The aircraft may be used to expand the airline’s route network from Simferopol, a resort city in Crimea, to include as many Russian cities as possible, even the remote ones. They may also be handy on routes to Western and Central Siberia, Klyucharev said.

Red Wings is also intending to become one of the first customers for MC-21.

The airline’s top-manager explained, that Russian-built aircraft have become ever more commercially attractive throughout the year “because Russian OEMs operate in the ruble-zone.”

“That trend is confirmed by the fact that the Russian-built aircraft are back in the charter segment, which is extremely sensible to cost,” Klyucharev observed. He also mentioned that costs associated with continued air worthiness increase by 8-10% annually due to inflation.

Red Wings traffic current forecasts for 2015 stand at 1.1 – 1.5 million passengers. The airline had to correct its ambitions after its extensive eight-destination charter program to Egypt launched in September was suspended with the flight ban to that country.

However, Klyucharev is still on the positive note, counting on a 20% YOY traffic growth at the end of 2015. The carrier reorganized its route network to include more leisure destinations in the South of Russia, such as Sochi and Simferopol. Demand on these destinations is expected to rise in the aftermath of collapse in other travel markets, including Egypt and Tunisia.