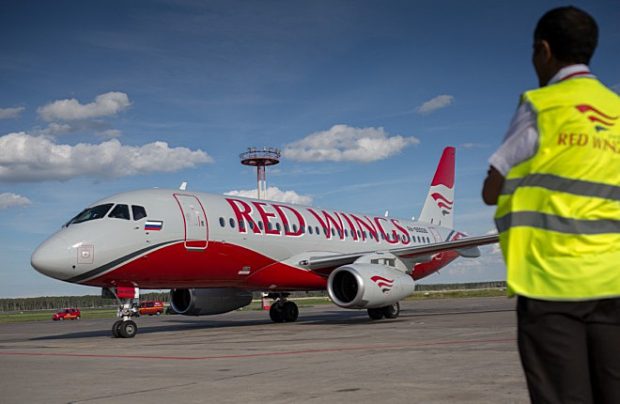 Using the current dire situation facing Russia’s airlines due to the Covid-19 pandemic crisis, the Russian aircraft industry has masterminded a plan to force its own Red Wings airline into buying dozens of unwanted Superjet 100 Russian regional aircraft.

The Moscow-based Red Wings is to return to its original concept as an operator of Russian-made aircraft, namely the Superjet 100 (SSJ100) regional jets and the yet-to-be serially-built MC-21 narrow-bodies.

Controlled by aerospace industry behemoth Rostec through the United Aircraft Corporation, Red Wings has been assigned to purchase up to 76 of the Russian-made aircraft over the next four years.

Ahead of 2024, Red Wings is required to purchase up to 60 SSJ100s and 16 MC-21s, Yury Borisov, Russia’s vice-prime minister, revealed in an interview with the state-owned Rossiya 1 TV broadcasting company. “At the premises of Red Wings, which is owned by Rostec, we will create an airline that will focus on operating Russian-made aircraft,” he announced. He also stated that the delivery schedule for these aircraft has already been mapped out and presented to president Vladimir Putin at the May 13 meeting dedicated to supporting Russian aerospace and airline industries throughout the on-going crisis.

“At the same time, this airline will be the basis for a new ‘role-model’ system for maintenance and repairs, to bring operations in line with global standards, so that there are no more accusations that Russian aircraft are second to western competitors in operating efficiency. This model will then be reproduced to support other airlines,” Borisov explained.

He also added that Red Wings will be granted certain preferences in terms of leasing terms, subsidies in flight hours and in fares to Siberia and the Far East of Russia – the flights and routes to be served by this new fleet.

Thus, in the next four years, Red Wings, which currently operates 14 Airbus A320 family aircraft, may expand its fleet more than six-fold.

According to industry sources, some 60 green-tailed SSJ100s are in various stages of completion at their manufacturer, which is now the Irkut Corporation. The number reportedly includes 22 fully assembled units, customers for which have either not yet been found or have refused to take them.

With regard to the MC-21, Red Wings is the long-time launch customer for the much-delayed advanced airliner. It even positioned its current operation of Airbus A320 aircraft as a stopgap measure in anticipation of the arrival of the MC-21.

Red Wings enjoyed a significant 17.1 per cent improvement in its operational performance last year allowing it to join Russia’s top-10 airline league table, ranking it in ninth place. Ironically, the airline’s pre-crisis commercial success was fully attributed to its decision to stop operating locally-built aircraft – after a brief courting, it dropped its SSJ100 plans in 2016 and withdrew its Tupolev Tu-204s in 2018. In fact, before the stakeholders increased their pressure on the airline, and as recently as early March, Red Wings’ management planned to grow its fleet of Airbus A320 family fleet, expecting to add six more A321s before the end of this year to a total of four A320s and 16 A321s. The airline also seriously considered leasing three Boeing 777-200ER wide-bodies.

An early sign of Rostec’s growing influence on the airline was the fact that a VIP-configured Tupolev Tu-204-100V and a Superjet 100 joined its fleet in the February-March period. These aircraft were operated primarily in the interests of high-ranking executives of Russia’s aerospace industry.