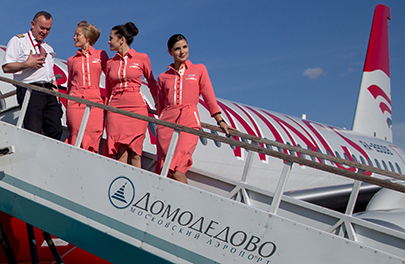 The owner of the carrier Red Wings, the Sky Invest Company, has aquired the assets of regional airline Nordavia from Norilsk Nickel. Russian Aviation Insider talked to Red Wings’ general director Yevgeniy Klyucharyov to find out how Red Wings Airlines will operate together with its new sister carrier under one management. RAI: How will the interaction between the Red Wings and Nordavia develop?

EK: First of all, I should note that the idea to acquire Nordavia stems from Sky Invest’s intention to build up its aviation assets and develop its business. If you look at this from a larger perspective, the business doubles as a result of the acquision: Red Wings carried 1.1 million passengers at the end of 2015, while Nordavia carried around 800,000, so the cumulative traffic of the two airlines at the end of 2016 is expected to reach 2 million passengers.

RAI: Do you mean there will be no merger?

EK: No, it will not be a merger. It will be some sort of collaboration between two airlines with two separate Air Operator Certificates. We are currently reviewing different models of how the two carriers could interact. We might form a management company, which will manage both operators.

RAI: As a parent company and a subsidiary?

EK: We are talking cooperation, not domination. Whatever structure we end up with, we will try to minimize our costs. But above all, without a doubt, the strategy, marketing and commercial policy will be formed by one center. We are also discussing the concentration of processes linked to PR, GR, service standards, ground handling, purchasing, training and so on. In general, we will try to centralize everything we can and thus eliminate redundancy, as long as these measures keep us within the current regulations.

I also would like to emphasize that Nordavia comes with a very good heritage, and the airline has left an extremely positive legacy from its time as a subsidiary of Aeroflot. I would like to mention the company’s high standards and corporate culture, from paperwork and communication to safety and aircraft maintenance standards, which are endorsed by all sorts of certificates. The airline is an IATA member and, in terms of sales, it is quite advanced.

RAI: What will the development strategy for the two airlines be based on?

EK: Naturally, as business grows, so does its sustainability; you acquire more routes, more connection flights that feed each other, and, as a result, you have a larger fleet. Along with this, however, there are more risks when the economy follows a negative trend. Our short-term task is to find our own market niche, within which we will be able to operate our fleet efficiently. It seems to me that with Red Wings we have been able to grabble that niche. We understand how to make profits this summer, that’s already something. Though we will hardly have charter programs, we will offer flights to Crimea from a number of cities. Nordavia’s route network in Russia’s northwest also appears quite interesting. New routes may also become a possibility, where we will fly directly between regions without a connection in Moscow.

RAI: The schedule will have to be revised, then what?

EK: The schedule has already been combined, since the transaction is taking a long time. We do not want to miss out the summer season, which is extremely important for the aviation industry. We are shaping our summer plans in cooperation with our colleagues in Nordavia, and we have introduced some changes, although Nordavia’s key geographical niche will be preserved, of course.

RAI: Isn’t, however, Nordavia’s schedule the one that has been revised the most?

EK: On the contrary: their changes are minimal. Our colleagues have built a sound network, and we have largely preserved it. We have reshuffled our flights to and from Moscow and made the decision to change Nordavia’s base airport in Moscow to Domodedovo to enable connections with Red Wings flights. It should work out as a good synergy: Nordavia specializes in routes to northern destinations, where as Red Wings flies south. We hope that by connecting that through one airport and single dispatch office, which we plan to establish later, we will grow our transit traffic.

RAI: Will there be a code-share agreement?

EK: Yes, no doubt, it will be a strategic partnership agreement. We are now working on this with our lawyers. There will be a bilateral interline agreement and code-sharing on all regular flights.

RAI: Are there any plans to transfer SSJ 100s to Nordavia’s fleet? Or maybe plans to assist your sister airline in preparing for operating this type?

EK: These plans are currently being negotiated. Red Wings’ experience in operating SSJ 100s is surely valuable for the group’s future development. Nordavia has a subsidiary called Nord-Technic and it has got plans to obtain certificates for the type’s MRO. So we envision further development in partnership with this company. Should this happen, we will be able to maintain the Red Wings fleet with Nord-Technic, a close structure managed at one center.

RAI: So your earlier plans for creating an in-house SSJ 100 maintenance facility are no more relevant?

EK: Right. We wanted to have it certified, but so far we are operating only five SSJ 100s (Red Wings has recently returned two of these aircraft to the OEM – RAI). Nord-Technic has the capacity to handle this number.

RAI: What about the Tupolev aircraft? What are your plans for this type?

EK: The aircraft is not currently produced in a passenger version because there’s no backlog. However, we have been able to acquire the Tu-214 aircraft previously operated by Transaero. The lessor is Ilyushin Finance Company, but there seems to be some complications in returning these aircraft to the lessor. We are in a parallel negotiation process with IFC and Transaero to get permission to sublease these aircraft for some period. Hopefully, there will not be any obstacles and we will start flying in June. We as an airline have prepared to start operations, including pilot and technician training. Three more Tupolevs is sufficient for expansion—we will have 10-aircraft strong fleet.

RAI: So you are currently operating seven aircraft. Are all of them leased from the IFC?

EK: Six from IFC, and one is subleased from Aviastar-Tu.

RAI: What about Tupolev maintenance?

EK: That is not a problem. We are certified, and there is an MRO provider, the Kazan factory. Tu-204 and Tu-214 are similar, although the maintenance procedures are a bit different. We have mastered the art of generating revenue with this aircraft. It is very profitable four months in a year. Its operational costs are also in rubles, so it is not dependent on the currency fluctuations. The summer is great, but the winter situation is not so great. We have, however, negotiated a reasonable and rational leasing scheme with IFC for these aircraft. I think that our Tu-204s, which are rather large and efficient aircraft, will continue to be the core of our fleet.

RAI: You have mentioned before that you were interested in operating Transaero’s cargo Tupolevs.

EK: The owner of these aircraft, IFC, is considering such plans. We participate in a tender in the interests of a third-party customer. There are not too many airlines that are capable of operating these aircraft.

RAI: Have you considered Western-built aircraft?

EK: Not at the present. But I would like to note that Nordavia is quite advanced in terms of operating Western-built aircraft. In my view, the group’s unique competitive advantage is its capability to work with Russian-built aircraft. In the future, we will look at the 130-seat SSJ NG with new Russian-built engines, the PD-14 and / or the 153-seat MC21-200 with the same engine. Developing regional fleet consisting of Russian-built aircraft will enable us to maintain acceptable level of operational expenses, and it will foster localization of production and MRO services in Russia, including Nord-Technik.