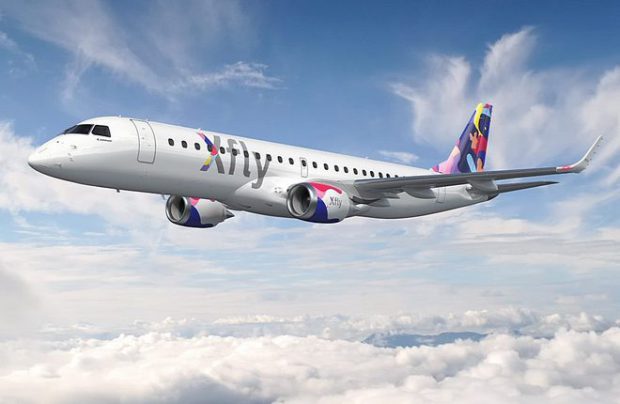 In major steps forward and with a view to boosting its competitiveness throughout Europe, Estonian supplemental aircraft carrier Regional Jet OÜ has announced the expansion of its fleet with the addition of seven Embraer crossover jets this year whilst, at the same time, adopting Xfly as its new brand name.

Xfly (Regional Jet OÜ) is the aircraft, crew, maintenance and insurance (ACMI) subsidiary of Estonia’s state-owned Nordic Aviation Group AS (Nordica), now jointly owned by Nordica (51 per cent) and the Polish state-owned airline LOT (49 per cent) and was founded in 2015 to operate flights on behalf of Estonian flag carrier Nordica, a successor to the defunct Estonian Air. Since the autumn of 2016, Nordica has been engaged in an extensive cooperation with LOT, providing supplementary aircraft to Poland’s national carrier. Gradually from then on, Nordica started providing wet-leased aircraft to other contractual partners across Europe and, as of 26th October 2019, it ceased flying its own routes, focusing instead exclusively on the ACMI business.

While Xfly’s current fleet includes 23 aircraft, the recent decision to undertake the largest expansion in the history of Estonian aviation will boost it by seven Embraer aircraft within the next six months. Four of the seven additions will serve routes from the Estonian capital of Tallinn to Stockholm, Brussels and Warsaw on behalf of LOT Polish Airlines. The new aircraft will also replace some older Bombardier CRJ900 aircraft.

With the arrival of the large Embraer jets, the company will have three different types of aircraft, including ATR72-600 turboprops and the CRJ900 and Embraer 190/195 jet airliners to wet lease. “This will give a significant boost to our competitiveness throughout Europe,” believes Jan Palmer, chief executive of Xfly.

Palmer notes that the expansion is underpinned by the adoption of the new brand name, which brings greater clarity to the role and to the position of the company in the aviation sector. ‘Regional Jet’ is a term commonly associated with jet aircraft that operate between regions and, besides, Xfly also uses turboprops, thereby rendering the word ‘Jet’ in the former brand name as somewhat inaccurately misleading.

“As we intend to start offering our clients longer flight connections, the word ‘regional’ will soon become an obsolete reflection of the company’s actual business profile,” Palmer says. Xfly is a company that provides long-term flight service solutions, including the provision of crews and other specialists and, as such, is not directly exposed to the risks of the retail market and its profitability does not depend on ticket sales, he points out.

Xfly employs 260 people in Tallinn, 150 in Denmark, 60 in Sweden, and an additional 35 specialists in other countries. Its clients include European airlines SAS, LOT, Luxair, Air Serbia, and flybe.