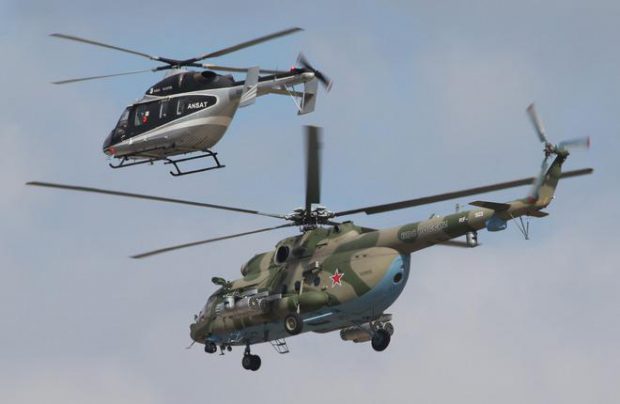 A consortium made of Russian Direct Investment Fund (RDIF) and investors from the Middle East is buying 12% of Russian Helicopters, according to the agreement the consortium signed with the rotorcraft holding’s parent, Rostec at the sidelines of IDEX 2017 show in Abu Dhabi.

Sale of the 12% share valued at $300 million is the first stage of the transaction. The consortium may choose to further invest in Russian Helicopters and bring the total amount to as much as $600 million (up to a 25% stake).

Rostec signed a letter of intent with the RDIF and Middle Eastern investors for the sale of up to 25% share for $600 million, in the summer of 2016. According to that document, the foreign investors would get privileged, not voting stocks, which will prevent their influence on the holding’s operations.

No details have been disclosed on the members of the consortium or how the shares would be divided among them. The holding intends to direct the funds raised from the sale to “further advance in its strategic objectives”, namely develop new types of helicopters. It is not ruled out that the investments will enable the holding to acquire new assets.

Commenting on the purchase , RDIF general director Kirill Dmitriev emphasized now that the deal will help drive up sales of Russian-made rotorcraft in the Middle East. In March 2016, head of Rostec Sergey Chemezov mentioned Mubadala Development, an Abu Dhabi-based independent investment fund, as one of the investors that expressed interest in Russian Helicopters.

Commenting on the size of the stake sold now Chemezov explained, that the number of investors had decreased. “This does not mean that the [sales process] was stopped, we just did not wait for the rest [of the investors],” TASS newswire quotes.

Rostec’s previous attempt to sell Russian Helicopters was in 2011. The corporation had planned to sell up to $500 million worth of stock on London Stock Exchange, but it was cancelled due to lack of interest.