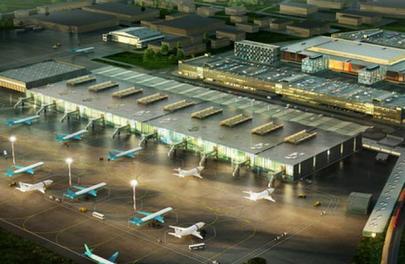 Ramenskoye Airport (IATA: ZIA), located in the village of Zhukovsky just outside of Moscow, will officially open in mid-March after it receives its first technical flight. This was announced by Tomas Vaisvila, general director of the airport’s operator – Ramport Aero, at the ongoing National Aviation Infrastructure Show (NAIS 2016).

Ramport Aero was counting on the passenger terminal entering service and receiving first commercial flights in the first quarter of this year. The terminal building is the first construction phase of a large complex that is expected become operational by 2020. The terminal’s area is 17,600 sq. m., and its annual capacity – 4 million passengers. It is expected to serve 2 million passengers in 2016.

Ramport Aero’s business plan implies that non-aviation revenues will generate the bulk of the airport’s income. The contracts already in place will contribute up to 50% of the forecast revenues, and that share should eventually grow to 70%.

Located to the southwest of Russia’s capital, Ramenskoye International Airport has the ambition of becoming the fourth player in the Moscow Aviation Cluster currently made up of Sheremetyevo, Domodedovo and Vnukovo. It plans to focus on experimental and state aviation, along with regular and charter commercial flights.

Ramport Aero was founded in the summer of 2014. It is owned by Russian state-owned Rostech Corporation and international aviation holding Avia Solutions Group.