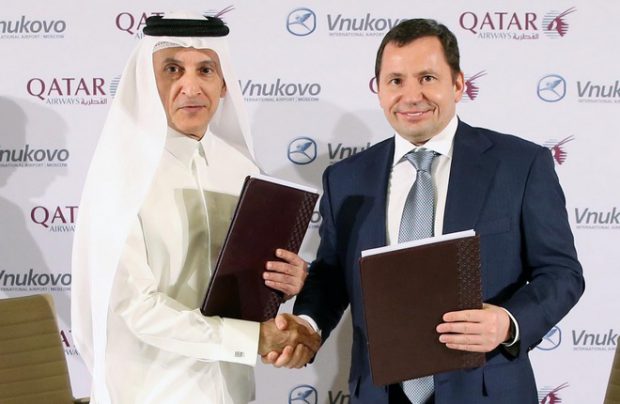 Qatar Airways has entered into a Memorandum of Understanding (MoU) to acquire up to 25 per cent of Moscow’s Vnukovo International, Russia’s third-largest airport. The signing ceremony took place at the Middle East carrier’s Doha headquarters on 4 April.

The news comes as Qatar Airways continues to invest in international partnerships in attempts to overcome the Gulf blockade being staged against the emirate.

Akbar Al Baker, Qatar Airways Group’s chief executive, signed the MoU along with Vitaly Vantsev, chairman of the board of Vnukovo International Airport.

According to Al Baker, there is already a strong relationship in place between the two nations. “As we celebrate the Year of Culture between Russia and the State of Qatar, I am very pleased to announce the potential acquisition of up to 25 per cent of Moscow’s Vnukovo International Airport. Such an investment will complement the strong ties we have already established with the country, with our launch of direct services to St Petersburg late last year, as well as our triple-daily flights to Moscow. All our investments are part of our existing expansion strategy.”

In 2016, the Qatar Investment Authority, Qatar’s sovereign wealth fund in conjunction with the Russian Direct Investment Fund, acquired a 25 per cent share in St Petersburg’s Pulkovo, another big Russian airport, the nation’s fourth largest. The fund also owns a 20 per cent stake in London’s Heathrow airport.

Even though Qatar Airways currently flies to Moscow’s Domodedovo, Vnukovo’s arch rival, it is hoped the Vnukovo agreement will be the start of a long and productive partnership.

As Vantsev points out: “Today we have signed the Memorandum of Understanding, the provisions of which could establish a foundation for a productive partnership between Qatar Airways, one of the world’s leading air carriers and a truly recognised touchstone of sterling quality of passenger and in-flight services, and Moscow’s Vnukovo Airport.”

“This gives me every confidence that our potential partnership will be mutually beneficial and good for all concerned through the further synergies it will be creating for each partner, enabling further growth,” Vantsev adds.

The Vnukovo deal is expected be finalised within eight weeks of the signing of the memorandum. No financial details have been released.