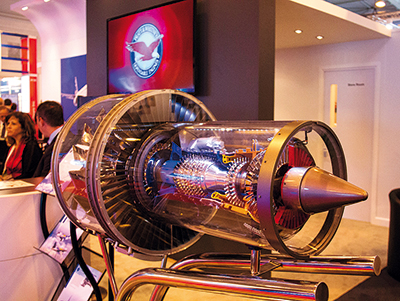 Perhaps the most important exhibit absent from MAKS 2015 is a Pratt & Whitney PW1400G-JM engine for Russia’s Irkut MC-21 airliner. The powerplant was delivered to Irkut Corporation’s production facility by a special charter flight on August 23. The delivery was on schedule; the second engine is scheduled for delivery in the second half of September. The roll-out of the first MC-21 aircraft is expected to take place by year-end. The first PW1400G-JM was assembled and tested at the Pratt & Whitney facility in West Palm Beach, Florida. Seeing as this engine will be powering the first MC-21 flying prototype, it was decided to ship it directly to Irkutsk rather than demonstrating it at MAKS first.

The PW1400G-JM is designed specifically for the MC-21 airliner. It is a member of the PurePower geared turbofan (GTF) family. GTF engines can slow the fan to increase the bypass ratio (meaning that the fuel burn reduces at the same level of thrust) while simultaneously increasing the speed of the turbine, thus enhancing its efficiency.