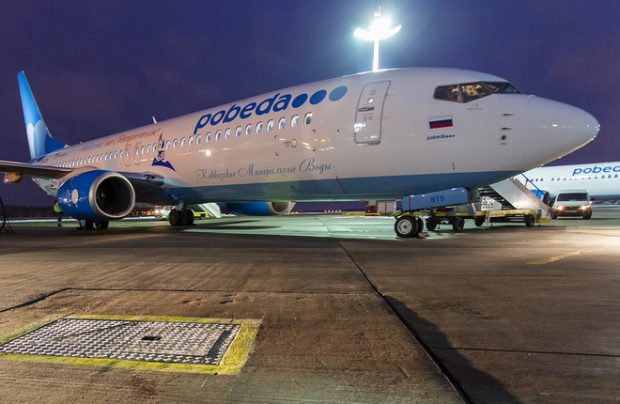 Without the additional aircraft, Pobeda's expansion targets will be severely compromised (Pobeda)

The continuing delivery delays to the Boeing 737 MAX aircraft programme has forced Pobeda Airlines, Russia’s only low-cost carrier (LCC), to review its 2020 growth projections. The airline is now targeting 12 million passengers this year, its general director Andrey Kalmykov admits, adding that the final performance will inevitably depend on the carrier’s ability to expand its fleet. Currently, the Aeroflot Group’s no-frills division is counting on taking only four used Boeing 737-800s from its sister carrier Rossiya Airlines this year.

“If we consider the scenario without the Boeing 737 MAX [deliveries] and without the four NGs we’re taking from Rossiya, then we would have handled around 11 million passengers this year. With the four 737NGs factored in, we might achieve around 12 million. Whether the 737 MAXs are delivered [this year], I cannot project,” Kalmykov adds.

Given that Pobeda’s 2019 traffic reached 10.28 million passengers, it is targeting an approximate 16 per cent growth rate this year. Last year Pobeda enjoyed a startling 43.2 per cent year-on-year growth, propelling it to fourth place in the ranking of Russia’s largest passenger carriers.

With the aircraft renewal problems on the horizon, Pobeda is steadfastly making the most of its young fleet. It is already a world leader in the daily utilisation of the B737, with up to 16 flight-hours per aircraft, and its average seat load factor remained high at 94 per cent last year. Clearly, without the additional aircraft, its expansion targets will be severely compromised.

At the same time, the Aeroflot Group is projecting between six and seven per cent growth for the combined traffic of its four carriers of Aeroflot, Rossiya, LCC Pobeda and far eastern regional carrier Aurora this year. Pobeda is the group’s growth driver, and it was expected to gradually grow its annual traffic to a figure between 25 and 30 million passengers by the end of 2023, according to Aeroflot’s latest five-year strategy, which was approved in late 2018.

Pobeda currently has 30 Boeing 737-800s in its monotype fleet and has contracted for 20 Boeing 737 MAXs, expecting the first batch of three units to be delivered last year, followed by a further 10 in 2020. However after two fatal crashes of the MAX, the type was grounded globally in March 2019 and its deliveries have been universally suspended.