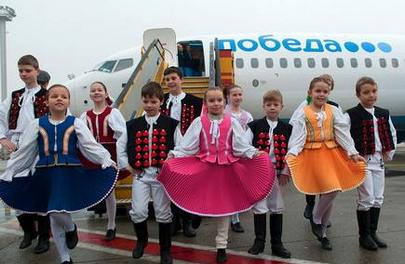 Aeroflot’s low-fares subsidiary Pobeda has launched international operations. Its first flight outside Russia took off from Moscow’s Vnukovo airport on December 19, and landed in Bratislava, Slovakia. From now on, the carrier will operate daily flights to that destination with its 189-seat Boeing 737-800 airliners.

There had been no direct air services between Bratislava and Moscow for several years since UTair Aviation and Aeroflot had stopped operating the route.

According to Pobeda General Director Andrey Kalmykov, the first flight to Bratislava was almost fully sold out. The carrier is offering coach transfer from Bratislava to Vienna (which is 55 km away) with a singe Fly&Bus fare. Almost half of the first flight’s passengers chose that option; the share of passengers traveling to Austria via Bratislava is exepected to reach 70% in the future.

The Slovakian tourism department, for its part, hopes Pobeda’s new service will boost the tourist flow to Bratislava. Almost 60,000 Russians visited the country in 2014, but the figure fell 30% year-on-year in the first nine months of this year, the department’s director says.

On December 20, Pobeda is launching its second international route, to Bergamo, Italy. Passengers will be offered to continue by coach to Milan under a similar Fly&Bus arrangement. Russian demand for this destination is even higher, Kalmykov notes.

In early January 2016, the airline will start flying to Saltzburg, Austria.

Since early November, Pobeda has sold nearly 30,000 tickets for its international flights. It has also received commercial rights for operating services to Verona, Dresden, Cologne, and Chamonix, but has not yet announced sales for these destinations.