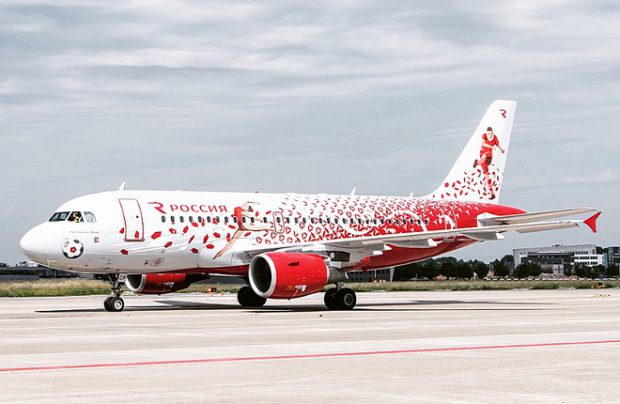 An Airbus A319 operated by Rossiya Airlines is sporting a new livery dedicated to the upcoming 2018 FIFA World Cup. The narrow-body aircraft, with tail number VQ-BCP, features winter sports (a hockey player and a figure skater) on its starboard side and summer sports (a footballer and a gymnast) on its port side. These sports were chosen “as some of the most popular with the Russian audience,” the airline, part of Aeroflot Group, insists.

At eight years old, VQ-BCP is Rossiya’s youngest А319 and was taken out of service for a week in May while Maastricht Aviation Aircraft Services (MAAS) of Holland painted its new livery at a cost of €67,500, according to the state procurement web portal. The Netherlands-based provider has three other customers in Russia – Aeroflot, NordWind and Yakutiya. After the painting was complete the aircraft had a maintenance shop visit with Lufthansa Technik Brussels in Belgium.

The airliner is the fourth in Rossiya Airlines’ fleet with a bespoke livery. The carrier also has an A319 (VQ-BAS) dedicated to St Petersburg football club Zenith, a Boeing 747 (EI-XLD) with a tiger face and a Boeing 777 (EI-UNP) with a lion’s face painted on its nose.