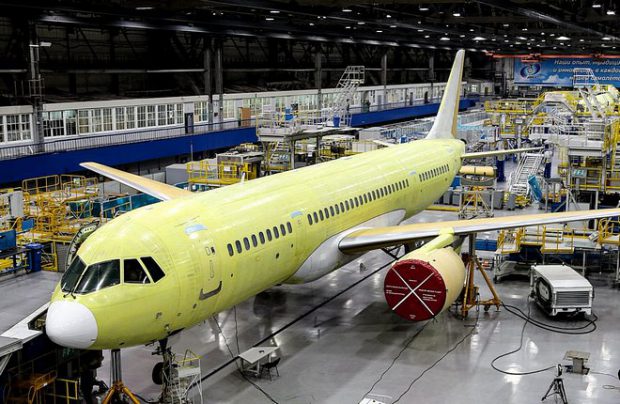 A third flight-test MC-21 prototype was rolled out from the Irkutsk Aviation Plant, a branch of Irkut, on 25 December 2018 (UAC)

Russian corporation Irkut, which is part of the United Aircraft Corp (UAC), has completed the assembly of a third flight-test MC-21-300 aircraft, the country’s advanced narrow-body airliner. During the production of the latest prototype, flight test results and recommendations were taken into account from two previous aircraft tests.

The third prototype was rolled out from the Irkutsk Aviation Plant, a branch of Irkut, on 25 December and Denis Manturov, Russia’s Minister of Industry and Trade, had earlier this year revealed that this latest aircraft is scheduled to take to the air in March 2019. The assembly of the fourth MC-21 prototype is being carried out, with a planned initial flight scheduled for mid-2019. “Adding more aircraft to flight test programme and the revitalisation of the production of serial aircraft are the main tasks for 2019,” insists said Yury Slyusar, president of United Aircraft Corporation.

Meanwhile, the Central Aerohydrodynamic Institute (TsAGI) is continuing to perform static tests on the MC-21 aircraft. Currently, the fuselage of the second static test MC-21 is being prepared to launch endurance tests, which are aimed at proving the viability of the fuselage design in terms of fatigue strength and operational survivability.

Currently, two Pratt & Whitney PW1400G-powered MC-21 units are taking part in flight certification tests. It is planned that this variant of the MC-21 will be certificated in 2020, a date recently re-postponed from its original schedule. The second variant of the MC-21 – one powered by Russia’s PD-14 engines – is expected to fly by the end of 2019.