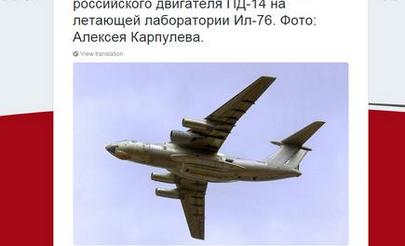 According to the source, the PD-14 flight-test prototype was rolled out mounted on the wing of an Ilyushin 76LL testbed on October 24, and completed its first flight on October 30. The engine was reportedly powered on during the flight.

As reported earlier, the seventh PD-14 prototype was originally intended to be used in flight testing phase, whose beginning was initially planned for July 2015 but slipped to the fall owing to formal financial difficulties.

The engine’s Russian certification is set for the spring of 2017, to be followed by EASA certification in 2018. The model is being developed by UEC subsidiary – Perm-based Aviadvigatel and will enter series production at Perm Motors, which is planning to be building 40 engines per year by 2025 and 50 annually by 2030.