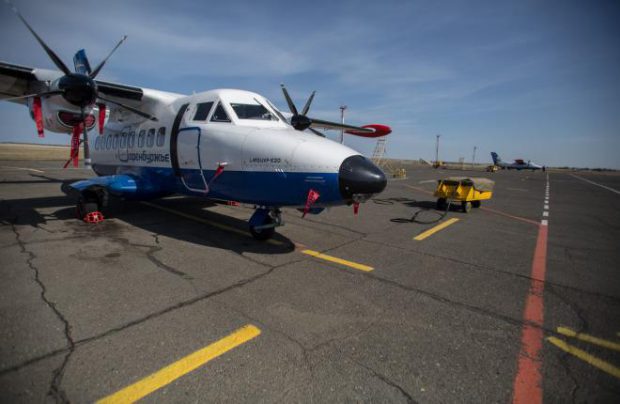 At the end of January Russia’s Orenburzhye, a subsidiary carrier of Orenburg Airport, told local media that it was considering leasing three 97-seat Embraer jets to complement its fleet of ten Let L-410 turboprops. Earlier Orenburg Airport has already been showing serious interest in Embraers, but ended up signing a letter of intent for eight Sukhoi Superjet 100s with GTLK State Transport Leasing Company at MAKS 2015 air show.

Orenburzhye was created at the premises of Orenburg Airport, owned by the regional administration, in 2013. At the same time the company asked Voronezh Aircraft Production Association (VASO) to deliver three Antonov An-148 jets by 2015. However, the manufacturer was loaded with governemnt orders and could not satisfy the request. Then the airport nearly arranged an order for three 116-seat Embraer 195s to have been delivered by 2015, but that deal never materialized when the ruble took a sharp dive.

With devaluation of the national currency, Orenburg Airport turned to a local solution for the expansion of Orenburzhye’s fleet. GTLK offered leasing payments denominated in rubles for eight SSJ 100s, and the airline was planning to launch operation of the type in 2016. The company officials explained that they needed to expand the airline’s fleet with regional jets because it was lacking capacity to launch a number of regional and international connections.

“The existing demand for flights to Simferopol, Anapa, Sochi, Mineralnye Vody, Irkutsk, Novosibirsk, Tashkent, Baku, Yerevan is currently not covered with relevant offer. Earlier there had been flights to these destinations. Our base carrier, OrenAir operates Boeing 737-800 aircraft configured with 189 seats. There won’t be sufficient traffic on these destinations to fill these capacities. I think we need 100-seat aircraft. We could also use them on those intra-regional routes, where the L-410s have raised significant demand,” an official for Orenburg Airport told Russian Aviation Insider at the end of 2014.

A year later a lot has changed – Sergey Mordvintsev became general director of the airport, and OrenAir was merged with Rossiya Airlines, which followed by significant downscaling of its operations from Orenburg.

If OrenAir even in its best shape failed to satisfy the needs of the region’s population, then how much more challenging and also critical the task of developing a route network from Orenburg airport has become after its base airline’s demise. At the end of 2016 passenger traffic through Orenburg shrank by almost 25% year-on-year.

In his response to the questions posed by Russian Aviation Insider, Sergey Mordvintsev chose to avoid direct answers concerning the choice of the new aircraft type and the project’s timeframe. Orenburg Airport’s top-manager said that Orenburzhye is set to develop its business and launch new routes, and that negotiations regarding operational leasing of Embraer E190s are underway. “Within the framework of this project the airline is now conducting a standard procedure to prepare for the operations of the new type, and it takes several months,” he said.

Russian Aviation Insider’s source in the industry familiar with the issue commeted that “nothing has yet been signed or finalized. But if it isn’t Emraer, it will be something else, because they are serious about their plans.”