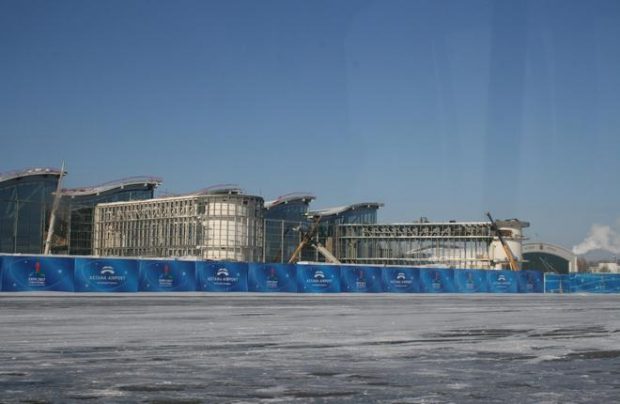 The airport looks to become a regional hub into a transport hub (ATO.ru)

An international terminal has been inaugurated at Astana airport in Kazakhstan. The addition will increase the airport’s annual passenger throughput capacity from the current 3.6 million to 8.2 million. The terminal is being put into operation in time for the launch of Expo 2017 on June 10.

“The project is unique in that each of our jetways consists of two movable gates, meaning that two gates will be used simultaneously for boarding and disembarkation,” says Astana Managing Director Kuandyk Ryspayev. “Previously this was rather difficult to organize, but now we can channel the passenger flows, and can also handle two aircraft at once.”

The airport aims to become a major transport hub in the region. An increase in passenger throughput and customer service improvements are expected to attract new airlines. “The new terminal’s inauguration has already attracted over 45 new weekly flights, which is an indicator of [the airport’s] infrastructure potential,” commented Paolo Ricciotti, chairman of the board at Astana, as cited by Sputnik newswire.

The airport expects the new open skies policy to contribute to its development as a hub. The policy, which was put in place in May in the run-up to Expo 2017, will remain in operation indefinitely should the project prove to be a success, the Kazakh prime minister has announced.

The new terminal will enable Kazakhstan’s national carrier Air Astana to grow. The carrier, which is currently based in the country’s main business hub Almaty, is expected to transfer to the capital city. CEO Peter Foster says Astana airport’s intention to boost passenger capacity has influenced the airline’s decision to relocate.

Astana hopes to see its annual traffic reach 4 million passengers by 2020. Kazakh President Nursultan Nazarbayev has announced that the figure would grow to 8 million by 2025.

Earlier, Ricciotti predicted that the additional passenger capacity would be sufficient for six to seven years to come. After which the airport could build a third terminal to boost its overall capacity to 15 million passengers per year, which would suffice until 2030. Further expansion would require the entire complex to be demolished, even though the airport’s only runway can serve the number of flights equivalent to 24 million passengers per year.