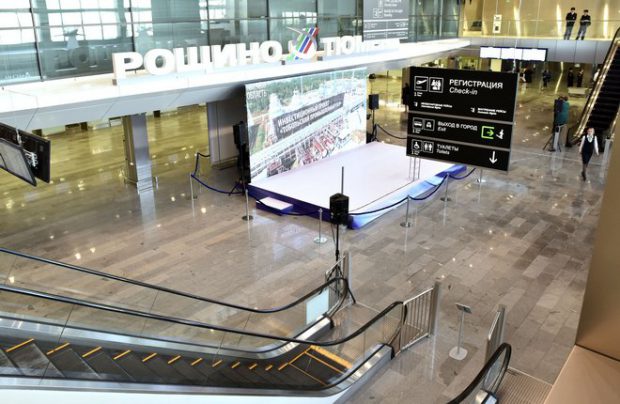 Completion of the new terminal building is the final stage of a massive reconstruction project in Tyumen airport launched in 2012 (Photo by admtyumen.ru)

A new terminal building has become fully operational at Tyumen Roshchino Airport, completing a massive reconstruction project. The reconstruction was aimed at enabling Tyumen to process growing traffic and remove all restrictions on the aircraft types the airport can handle.

The upgraded terminal complex has the area of 27,000 square meters, four times larger than the old terminal floor. The capacity has increased from 250 to 600 passengers per hour. The annual capacity grew to 5 million passengers.

The terminal expansion in Roschino airport began in 2012. By then it was obvious that the only terminal building dating back to 1969 could not handle the growing traffic. At the first stage of the reconstruction two new buildings were erected for handling domestic and international flights. Then the old building was dismantled and replaced by a segment, which connects the two new terminals.

Unlike the old building, the new terminal has five jet bridges. In general, the upgrade will facilitate flight network expansion from Roshchino. The airport management company is taking an active stand in the process by setting convenient connections between airlines that have no partnership agreements. By 2025 the airport’s traffic is expected to reach 3 million passengers, the airport’s spokesperson told Russian Aviation Insider.

According to Tyumen regional administration, in 2016 Roshchino handled 1.531 million passengers, up 9.4% year-on-year. The growth was generated by new flights to Moscow and leisure destinations in the South Russia, as we as development of intraregional route network.