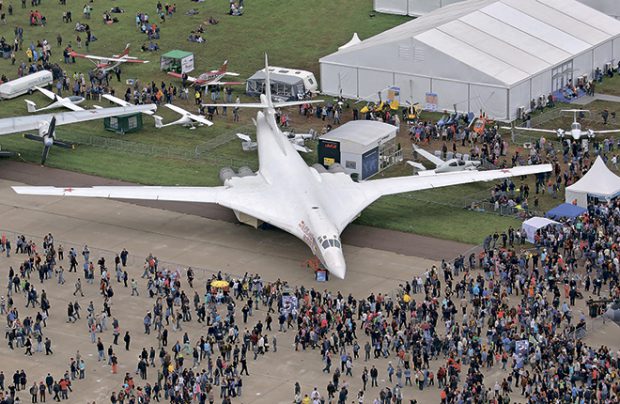 A Blackjack on static display at MAKS 2013 (Fyodor Borisov / transport-photo.com)

The project, dubbed Tu-160M2, will have completely new avionics and armament. Its performance is expected to exceed that of the baseline by 2.5 times. As earlier reported, the Defense Ministry has been looking to procure up to 50 Tu-160M2s, at a rate of three to four deliveries per year.

Kazan Aviation Plant has restored the core competencies required for relaunching the Tu-160 production line. Production of large welded titanium parts for the aircraft was started in the spring of 2017. Parent company United Aircraft Corporation reports that over a third of the Tu-160 parts are made of titanium. For this reason, unique electron-welding and vacuum-annealing equipment had to be upgraded for production purposes.

Deputy Defense Minister Yuriy Borisov reported earlier that Kazan Aviation Plant had started producing wingboxes for Tu-160M2s. He also confirmed an earlier announcement that the aircraft was set to perform its maiden flight in 2018, and that series production was to begin in 2021.

The 16 Tu-160M bombers currently operated by the Russian Aerospace Forces will thus be profoundly upgraded. The modernization effort will include re-engining the aircraft with Kuznetsov NK-32-02 powerplants and installing new radio communications and navigation equipment, including satellite navigation aids.