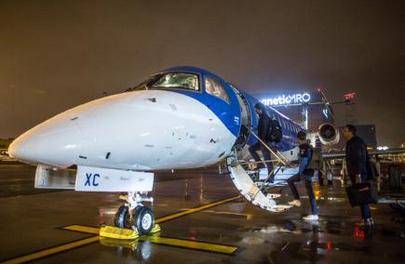 Estonia’s newly formed airline Nordic Aviation Group will receive its Air Operator Certificate in 2016. The airline has been founded and is controlled by the Estonian government. It intends to start flights to Russia with leased Bombardier CRJ700/900s, the airline’s board member Erik Sakkov told Russian Aviation Insider.

Nordic Aviation Group’s first flight, from Tallinn to Amsterdam, was operated by bmi Regional with an ERJ145 on November 8. In the first month of operations the new airline carried 26,400 passengers on 726 flights (36 passengers per flight on average).

According to Sakkov, the 2016 summer schedule will be announced before the year-end, and itis possible that several Russian destinations will appear on the carrier’s route map: “The Russian market is very interesting. We are considering not just Moscow and St. Petersburg but other Russian cities as well. However, to start flying to Russia we need the Russian authorities’ support and approval.”

Asked why Nordic Aviation Group chose Adria Airways as its prime partner, Sakkov explained: “We were searching for an airline that had an operational platform for CRJ aircraft, as well as an efficient commercial platform. We pay Adria Airways for using these platforms. Legally speaking, all of our flights from Tallinn are operated by Adria Airways.”

Nordic Aviation Group’s business strategy is based on operating Bombarider aircraft: in the first half of 2016, the airline is planning to lease a number of CRJ700s and CRJ900s, and also to obtain its own AOC. The choice of the Bombardier aircraft is understandable, given that the carrier employes flight and cabin crews trained on both types whom it inherited from Estonian Air, which used to operate CRJ700s and CRJ900s until folding in November this year.

Nordic Aviation Group received 40 million euros from the Estonian government is support of its business development. The government originally intended to increase Estonian Air’s registered capital by the same amount, but Sakkov notes that Nordic Aviation Group’s funds come from other sources, and that the decision to set up Estonia’s new flagship carrier was politically motivated.

“There are 1.4 million people living in Estonia, including 450,000 in Tallinn,” he says. “It is a small market, we do not see much interest from other carriers, so we do realize that even if Tallinn were an interesting destination for them, there are many other points on the map of Europe flying to which would be much more profitable. Air services are problematic for our small community, and this is exactly what the government is for: for solving those problems which the market cannot solve. The Open Skies policy is a great thing, but it is not doing anything to expand our market or make it more attractive for mainline carriers. Almost all [European] low-fares carriers fly to Tallinn. However, this is not something on which you can base all of your political, economic, and cultural ties. So, all these factors considered, Estonia needs its own government-run airline, even if such a carrier will not be generating huge revenues.”

Nordic Aviation Group will be a classic airline primarily aimed at providing direct flights between Tallinn and those European destinations to which no other airline operates [from Estonia]. The airline has no immediate cooperation plans with Latvia’s airBaltic, which has proposed creating a single carrier for the Baltic states now that Air Lituanica and Estonian Air have left the market.