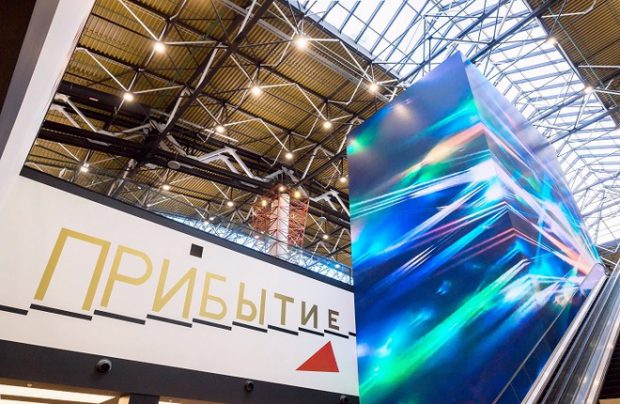 In a massive reconstruction effort, partly timed with this summer’s 2018 finals of FIFA World Cup to take place in Russia, Moscow’s Sheremetyevo airport (SVO) has completed construction of its new Terminal B in the northern part of the country’s busiest airport. Base carrier Aeroflot has started transferring its domestic flights to the new terminal, a process which is expected to stretch beyond June.

Perhaps one of the most significant features of the new airport infrastructure is the underground fast track – a tunnel, which links the northern and the southern parts of the airport. An driverless and fully automated train takes passengers between terminals D, E and F – and the new Terminal B, in as little as four minutes, a huge improvement over ground shuttle buses, which were inevitably delayed by traffic. A separate tunnel is built for baggage delivery.

The 1,936 m long tunnel is an important milestone, as it corrects the historic misconception in the airport’s layout. Sheremetyevo, as well as Pulkovo in St. Petersburg were originally (in Soviet times) built in the way that domestic and international terminals were separated by large distances and not connected even by ground transportation. As these airports developed as hubs with ever shorter connections between flights, they struggled to introduce remedies for transfer passengers. The tunnel is the final solution that puts Russia’s largest airport in line with the world’s busiest international hubs.

The new Terminal B has the floor area of 110,525 square meters, and annual capacity of up to 20 million passengers (4,200 passengers per hour). Its new automated baggage processing system is integrated with other terminals with the total throughput of 4,800 pieces of baggage per hour. Waiting to be implemented is the iBeacon system, which will provide online navigation around the airport for passengers using Sheremetyevo mobile app.

Further plans for the airport include reconstruction of the currently inoperable Terminal C in the northern part of Sheremetyevo and its integration with the new Terminal B in 2019. This will further increase the airport’s capacity.

The capacity increases and significant improvement of capabilities for transfer passengers may mean a game plan change for Moscow’s three airports. Aeroflot’s subsidiary Rossiya Airlines is already mulling relocating to Sheremetyevo from its capital’s base Vnukovo airport. Ural Airlines, another Russia’s top-5 carriers, is also considering expanding its network from SVO. It has recently opened several flights from this airport, and said it was waiting for the gateway to open its third runway to introduce more.