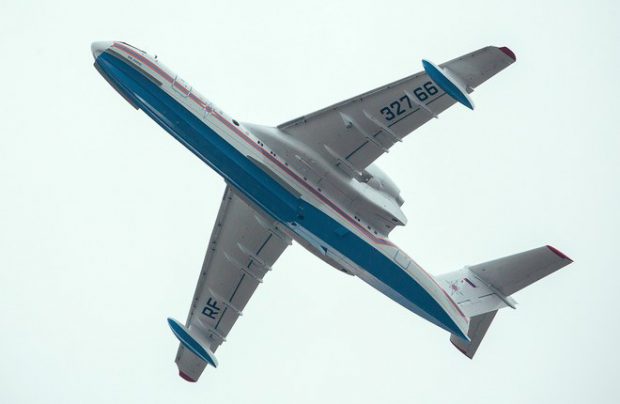 Re-engined with PowerJet SaM 146 turbofans, Russia’s Beriev Be-200 amphibian is scheduled to make its maiden flight in March 2020, with Russian certification delayed until November 2021.

The latest details have been revealed by Ilya Konyukhov, the UEC-Saturn project’s director, in a presentation at a recent industry event in Moscow. The first of several new engines for the programme will be supplied in December 2019.

The SaM-146 engine is a product of PowerJet, a joint venture between Russia’s NPO Saturn (part of United Engine Corporation, UEC) and French manufacturer Snecma (part of the Safran Group) and is currently deployed on only one platform, the slowly unwinding Superjet 100 (SSJ100) Russian regional jet programme. As such, the limited fleet of SSJ100s is impeding the engine’s timely development towards more economically viable production rates.

This is where the Be-200 re-engining solution fits in. According to the project schedule, the adopted version of the engine and its nacelle is to be certificated in Russia by late 2020, whilst certification of the re-engined aircraft – dubbed Be-200ChS-146 – has now been shifted to November 2021. The project leaders are hoping to eventually win type certification from Europe’s EASA and USA’s FAA, thus opening up international market opportunities for the aircraft.

The prospect of replacing the engine type has been mulled over for some time, but was finally announced at the St Petersburg International Economic Forum in May and, at the seaplane and amphibian show in Gelenzhik in September, the Be-200 stirred considerable interest. For example, US company Seaplane Global Air Services signed a contract for 10 Be-200s, including four firm orders. “Two of them will be delivered with the [existing] D-436 engines in place but, further ahead, the entire fleet will be re-engined with the SaM146s. This is one of the contract’s provisions,” explains Konyukhov. The little known US firm intends to dry- and wet-lease its Be-200s to operators worldwide, it states.

Furthermore, an order for two Be-200s – with an option for an additional three – was signed by Chile-based Asesorias CBP. The Russian aircraft manufacturer has also negotiated with Israeli SHZ Aviation regarding financing of Be-200 deliveries to Asian customers, primarily in Indonesia, Thailand, Vietnam, Malaysia and the Philippines. A round of negotiations was also conducted with a Chinese delegation. Overall, the resulting interest is assessed at nearly 60 re-engined aircraft, which translates to at least 120 engines, Konyukhov adds.

The plan to re-engine the Beriev Be-200 was first raised some five years ago in recognition of the need to improve the aircraft’s performance. Back then it was not associated with Russia’s degrading relationship with Ukraine, which has affected the Ukrainian engine maker Motor Sich, the producer of Be-200’s D-436 engines. But the project received a new stimulus in February this year – the schedule was finally sketched and its various aspects were coordinated with Russia’s ministry for industry and trade, as well as PowerJet partners Safran and UEC, paving the way for a contract signing in May.

Commenting on the role of the French company in the project, Konyukhov says they were “in charge of the main part – making engine control possible within its new application. This means, it is amending the laws of the engine control and making appropriate changes in the software which controls the engine.”

The new engine option will increase the Be-200’s operational ceiling, allowing the aircraft to be ferried between its mission destinations at altitudes above 10,000m. This, in turn, will result in as much as a 17 per cent improved fuel efficiency compared to the Ukrainian-made D-436TP. The weight of the aircraft will not change.