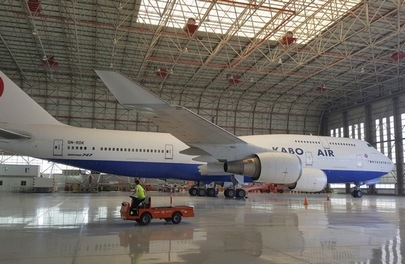 Volga-Dnepr Gulf (VD Gulf) will provide maintenance services on a Boeing 747-400 owned by WWTAI AirOpCO 1 Bermuda. Under the terms of the contract, the UAE-based subsidiary of Russia’s Volga-Dnepr Group will perform required checks and inspections up to C-check, implementation of open airworthiness directives and complete undercarriage replacement for the company, a subsidiary of the Fortress Investment Group. All work will be done at VD Gulf’s facility in Sharjah, UAE. The 18-year old passenger airliner, in 2010 to 2015 operated by Transaero, will then be leased out to ‘a leading Far Eastern charter operator’.

“Winning a leasing company as our customer takes Volga-Dnepr Gulf one step closer to becoming a leader among independent MRO providers in the EMEA,” said Viktor Sherin, managing director of VD Gulf. The company claims to be the only independent MRO provider focusing on the markets of Middle East, India and Africa and capable to perform the entire range of MRO activities on Boeing 747-400, 737CL/NG and 757 and Airbus A320. It also offers a scope of maintenance services on Russian-built Ilyushin IL-76 and Antonov An-124-100 aircraft. The company has noticeably developed its maintenance capability since its inception in 1996 and now uses 22,000 sq. m of aircraft maintenance hangar facilities in Sharjah airport. VD Gulf is an EASA Part 145 approved organization.

WWTAI AirOpCO 1 Bermuda is a subsidiary of Fortress Investment Group, a diversified investment management firm which owns more than twenty wide- and narrow-body commercial aircraft and manages an investment portfolio of $76 billion.