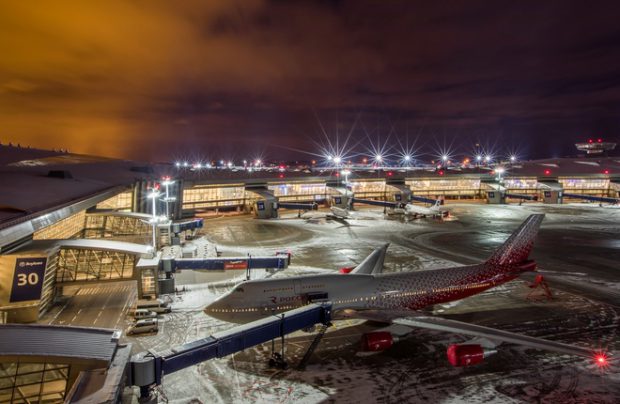 Rossiya Airlines retained its charter operations in Vnukovo, instead of moving them along with its scheduled flights to Sheremetyevo (Vnukovo)

Vnukovo, Russia’s third biggest airport, has retained its status as the growth-rate leader, having demonstrated a 12 per cent year-on-year improvement. In absolute figures, for the first time in its history, the airport recorded more than 24 million passengers. For the winter season of 2019/2020 the airport handled 28 airlines, including its anchor carrier Utair. Contributing factors for Vnukovo’s positive developments were the aggressive fleet expansion of Aeroflot Group airline Pobeda, which allowed Russia’s only low-cost carrier to expand its route network and increase the number of its flights and traffic; and the high growth rate of Turkish Airlines was also a factor, as was the fact that Rossiya Airlines, another Aeroflot Group carrier, retained its charter operations there, instead of moving them along with its scheduled flights to Sheremetyevo.

Sheremetyevo, Russia’s main gateway, reported a notable 8.9 per cent year-on-year increase in passenger numbers, up to 49.9 million last year. International traffic rose by 7.8 per cent to 26.6 million, mostly to Antalya, Yerevan, Paris, Beijing and Tel Aviv and domestic traffic went up by 10.3 per cent to 23.3 million. The most popular Russian destinations included St Petersburg, Simferopol, Sochi, Yekaterinburg and Krasnodar. Meanwhile, 19 new services were launched at Sheremetyevo airport in 2019, including those served by Brussels Airlines, Vietnam Airlines, Japan Airlines, Turkish Cargo and Belavia.

The significant advancement of Sheremetyevo’s ground infrastructure achieved in 2019, has now prepared a solid base for more growth this year. For example, launched last September, the long-awaited third runway is poised to increase the airport’s capacity from 65 to 90 take-offs and landings per hour. Also, in November 2019, Russia’s aviation authority Rosaviatsiya issued an approval for the re-opening of Terminal C, which had been undergoing major reconstruction works. The rejuvenated terminal, which is designated for international flights, will serve its first passengers this month. With more than 127,300sq-m of floor area, it has the capacity to handle 20 million passengers per year.

By contrast, Domodedovo, Russia’s second-biggest airport, suffered from passenger traffic stagnation for the second consecutive year. Although its final year-end results are not yet known, the January-November period figures showed a 4.7 per cent year-on-year decline in passengers, in a growing passenger numbers market, down to 26.252 million. In 2018 the airport served 29.4 million passengers, 1.2 million people less than the year before.

The primary reasons for the privately-operated Domodedovo airport’s stagnation are the long-term delays in its airfield infrastructure development, a responsibility which lies within the remit of the Russian government. This shortfall means that the airport operator is still unable to start using its newly-built Terminal T2 because state aviation body Rosaviatsiya, the nation’s Federal Air Transport Agency, has failed to satisfy the strict deadlines for related apron and runway reconstruction projects. The first wing of the new Terminal 2, when completely ready for service, will be able to provide the airport with an additional floor area in excess of 157,000 square metres.

In addition, Rosaviatsiya has failed to built a new runway and the existing Runway-2 has been partially decommissioned, its length reduced from 3,800 to 2,370 metres, and radio-communications systems dismantled. According to the Accounts Chamber of the Russian Federation, these slippages have reduced the airport’s potential capacity by 35 per cent. Furthermore, the reconstruction of Domodedovo’s Runway-1 has not been completed in full. Alexander Neradko, the head of Rosaviatsya, in his recent interview at the end of 2019, claimed that financial and organisational problems have finally been solved and that all construction works will be completed by the end of this year.

Despite Domodedovo’s infrastructure hurdles, three of Lufthansa Group’s airlines – Lufthansa, Austrian Airlines and Swiss – are to continue to operate their Moscow flights to and from Domodedovo International airport, at least until 2025. The Group extended its contract with the airport last year, after reportedly considering switching its operations to Sheremetyevo.

In another move, Air Astana, the flag carrier of Kazakhstan, has decided to transfer its flight operations from Sheremetyevo airport to Domodedovo from the IATA 2019 winter season. The move comes after a recently signed code-share agreement struck with S7 Airlines, which has Domodedovo as the Russian carrier’s capital city as its operational base.