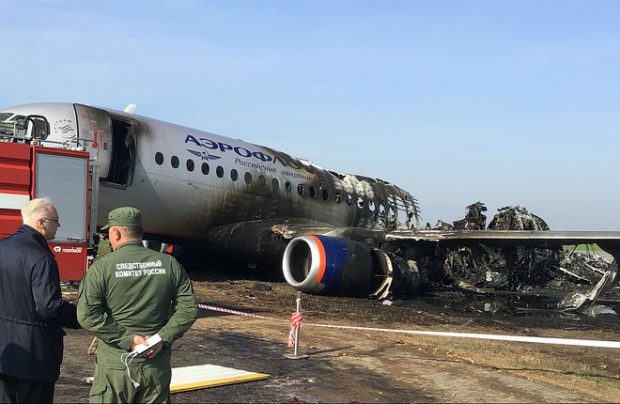 Moscow SSJ100 crash: Why did the fire spread so quickly? Could the tragedy have been avoided? (Russia’s Investigative Committee)

Three weeks after the fatal crash of the Superjet 100 (SSJ100) at Moscow’s Sheremetyevo airport, which took away 41 lives, Russia’s Air Transport Operators Association has written a letter to Minister of Transport Evgeny Ditrikh raising serious question marks about the overall safety of the aircraft type.

During its climb after take-off from Moscow’s Sheremetyevo airport on May 5, the aircraft (registered as RRJ-95B according to its type certificate) operating Aeroflot flight 1492 was hit by lightning, it is reported, which resulted in an immediate malfunction of the aircraft’s radio and autopilot systems and which also put the fly-by-wire into its backup Direct Mode. With full fuel tanks, the crew decided to return to the airport for an emergency landing.

The aircraft hit the runway hard on its first touchdown attempt and bounced to a second contact. On the third touchdown the main landing gear struts and actuators destroyed the wing-box and wing’s fuel tanks. The aircraft burst into flames. Of 73 passengers and five crew members aboard only 37 were evacuated and saved.

The letter from the Air Transport Operators Association (AEVT in Russian) calls for the minister to initiate additional checks to ascertain that the Superjet fleet fully matches RRJ-95B’s type certificate standards. For the type’s continuous and safe operation the Association has recommended that checks focus on the following systems and capabilities of the aircraft:

Put another way, even though the SSJ100 has been awarded both Interstate Aviation Committee and EASA type certification, operators are now wondering why a lightning strike can practically disable all radio, navigation and flight control systems; why hard contact with the runway caused the demolition of the central wing fuel tanks, causing a massive fuel leak; and why the tail section of the aircraft’s passenger cabin burst into flames in only a few seconds, giving no chance to save passengers’ lives.

The Association is also proposing the initiation of a complex modernisation programme that, based on 10 years of operational experience and the findings of the recent accident, will systematically improve the aircraft’s airframe and its systems, resolve engine reliability issues and put in place modern and more efficient maintenance support.