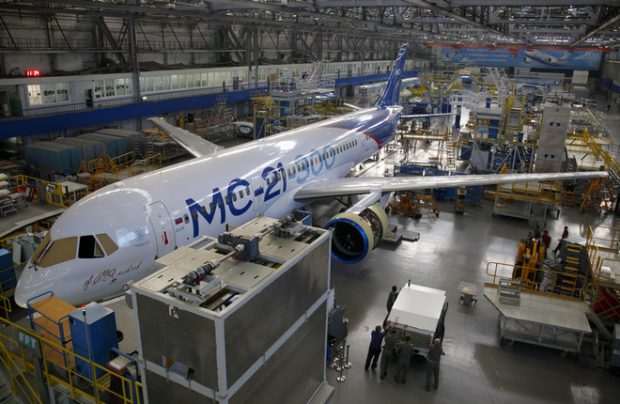 Moody’s Investors Service (Moody’s) has downgraded to B1 from Ba3 the corporate family rating (CFR) and to B1-PD from Ba3-PD the probability of default rating (PDR) of Irkut Corporation, Russia’s government-related producer of civil and military aircraft.

The outlook has been changed to stable from negative, says the ratings agency, even though there is continuing deterioration of the company’s standalone credit profile which points to the company’s current reliance on government support during the heavy investment phase of the MC-21 aircraft project, Russia’s advanced narrow-body transport venture.

As Irkut is controlled by the Russian government, the company is seen by Moody’s as being highly dependent on the government both for aircraft construction orders and for its funding, whilst also benefiting from the government’s on-going support such as contributions to research costs, the partial reimbursement of interest expenses, regular equity injections and interest-free loans.

Today’s downgrading of Irkut’s rating to B1 from Ba3 was triggered primarily by the deterioration in Irkut’s standalone creditworthiness – and reflects Moody’s assumption of the strong probability of accelerated state support in the event of financial distress.

Irkut’s standalone creditworthiness has materially weakened over the last few years because of a combination of the increased debt-funded research and development costs for the new generation MC-21 civil aircraft, and for the lack of high-margin sales revenues of such a nascent project.

The volume of low-margin military aircraft contracts agreed with Russia’s Ministry of Defence are insufficient in themselves to support the budgeted funding of the MC-21 programme without a substantial increase in new debt and leverage.

Moody’s outlook expects Irkut’s operating performance to remain weak over the next 12-18 months, as investments in the MC-21 project continue. Negative free cash-flow generation in 2018-19 is likely to be debt funded, increasing the borrowing requirement through 2019.

However, the overall credit risk is partially mitigated by the long-term strategic value of the MC-21 project for the Russian government, which orchestrates its funding support via state-controlled banks and state-related entities on a regular basis. In 2017, Irkut Corporation – one of Russia’s biggest companies in the aviation sector – generated revenues of approximately RUB84.5 billion. (US$1.43 billion)

In the mid-term, Irkut’s operating performance and its leverage should improve significantly after 2019, which is when the aircraft production company is expecting to see the benefits of ramped up commercial production and sales of the MC-21 – and the consequential generation of higher-margin export revenue.

Meanwhile, Moody’s also positively acknowledges that two prototype MC-21 aircraft have successfully completed maiden flights, proving that the programme is generally on track. However, in Moody’s view, as the test programme continues, the associated execution and delay risks, both in the certification and production stages, remain high.

At the same time, Irkut’s is positively factoring in a strong backlog of state orders, plus the availability of solid cash reserves and undrawn committed facilities from the state banks. The former provides some visibility into the company’s revenue prospects, whilst the latter eases liquidity pressure.

“The stable outlook on Irkut’s rating reflects our expectation that the company’s credit metrics will not weaken materially further over the next 12-18 months; and liquidity will continue to be at least adequate,” says a statement from the credit agency.

The stable outlook also assumes no negative change in Russia’s sovereign rating and in Moody’s assumption of continuing strong government support. Therefore, upward pressure on Irkut’s rating is unlikely over the next 12-18 months, especially given that no material improvements in the military aircraft segment are envisaged through 2019.

There are, though, a number of circumstances whereby Irkut’s rating could be downgraded, especially if Russia’s sovereign rating were to be downgraded. For example, they include any diminishment of the Russian government’s support for Irkut; the execution of the MC-21 project being materially delayed; the emergence of difficulties in obtaining external funding; or Irkut’s financial profile deteriorating further, with liquidity weakened on a sustained basis.