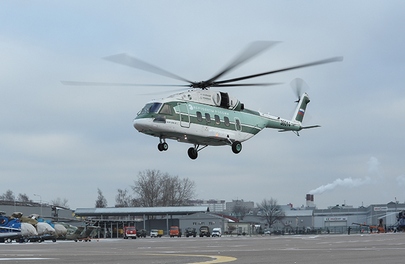 The Mil Mi-38 heavy utility helicopter has received a Russian type certificate from the Federal Air Transport Agency, which is now in charge of aircraft certification instead of the Interstate Aviation Committee.

According to Russian Helicopters General Director Alexander Mikheyev, the OEM completed certification of the Mi-38 helicopter’s transport version: “Within the next two or three years, we are planning to certify the passenger version. This program is to be completed in 2017; in parallel, we are working to develop the search-and-rescue and offshore modifications.”

The Mi-38 is in high demand on the market, Mikheyev says: “We have conducted preliminary market research, and we expect initial demand to stand at 10-15 aircraft. However, we could not start negotiations because we did not have a price estimate.” Candidate launch customers are oil and gas producers, organizations engaged in Arctic missions, and infrastructure companies. Foreign firms also have been voicing their interest, but Russian Helicopters is currently working exclusively with the Russian certification authority.

The helicopter will be equipped with a pair of Russian-made Klimov TV7-117V turboshaft engines. The powerplant design has a limited certified life of 100 hours; its testing is still underway. A supplemental type certificate extending the engine’s service life to 1,000 hours was expected to be awarded in late 2015.

“That engine looks encouraging, and we are confident that every aspect of this helicopter program will be completed in 2016,” Mikheyev says. Russian Helicopters has placed an order for 50 engines with the United Engine Corporation, with deliveries to begin in early 2016.

Mi-38 series production for commercial and government operators will begin in 2016. The first fuselage has been assembled at Kazan Helicopters. According to the Russian Ministry of Industry and Trade,  175 Mi-38s are to be built by 2025, and up to a total of 264 by 2030.

The 30-seat Mi-38 fills the lifting capacity niche between the Mi-8/17 family and the Mi-26. It can transport 6 tons of cargo iternally or 7 t underslung.