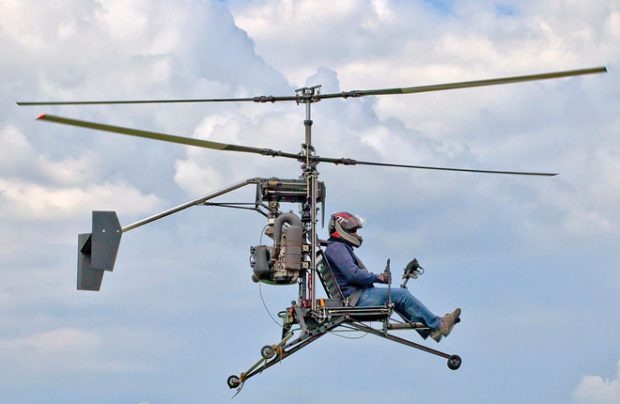 Russian laws do not require certification of the Micron, the developer says (RD-Heli)

Premiering at MAKS 2017 is the Micron single-seat ultralight coaxial helicopter. Although the aircraft is still undergoing tests, several customers have already signed up. The developer, Moscow-based RD-Heli, told Russian Aviation Insider that the Micron’s empty weight stands at 115 kg, and that it maximum take-off weight amounts to 242 kg. The aircraft’s cruising speed is 88 km/h; its maximum airspeed is 112 km/h. It has a range of 88 km on a full 19-liter tank, and 240 km with a 52-liter tank installed.

The Micron is equipped with a single 60-hp Rotax 503 engine, which runs on regular unleaded gasoline. It is possible that the helicopter will be fitted with a hybrid powerplant in the future.

The company has no immediate certification plans. “Due to [the aircraft’s] low weight, and in the light of the current legislation, registration and pilot licensing for such aircraft is not required,” an RD-Heli spokesperson explained. “We are not planning to begin sales of the manned version this year as factory tests are still in progress. For now we can only hope that the laws will not be changed in 2018.”

The Micron can be used as a personal transport, for freight transportation, for surveillance and fire patrol purposes. It could also find applications in agriculture.

“The helicopter is designed to be compact for easier transportation,” the spokesperson said. “Its foldable fuselage, detachable rotor blades and tail boom allow for transportation on trailers and in small-sized containers.”

The baseline variant will be priced at 2.5 million rubles ($41,400). The company is working to develop a twin-seat modification and an amphibious version; both are expected to be ready by the end of 2018.