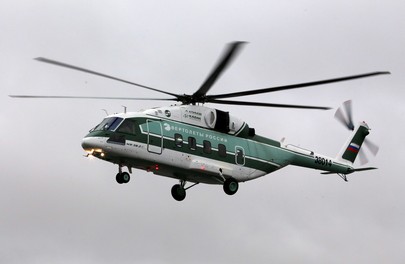 The Mil Mi-38 medium/heavy-lift utility transport helicopter has found itself a launch customer, Andrey Shibitov, Russian Helicopters’ deputy CEO for production and innovation, announced last week. He declined to name the client, saying only that the agreement involved three aircraft and an option for five more.

According to Shibitov, Russian Helicopters expects to secure additional orders for the type in 2016 and 2017, and has already agreed on the requirements for the offshore version with potential oil-and-gas customers. It will also meet the standards of the International Association of Oil and Gas Producers.

The Mi-38 is aimed to fill the gap in Mil’s product line between the medium-lift Mi-8/17/171 family and the Mi-26 super heavy model. Its cargo carrying capacity stands at 6 t internally and 7 t underslung, or 30 passengers. The aircraft is powered by a pair of Klimov TV7-117V turboshafts each producing 2,500 h.p. take-off thrust.

Serial production of the Mi-38 is expected to start this year.