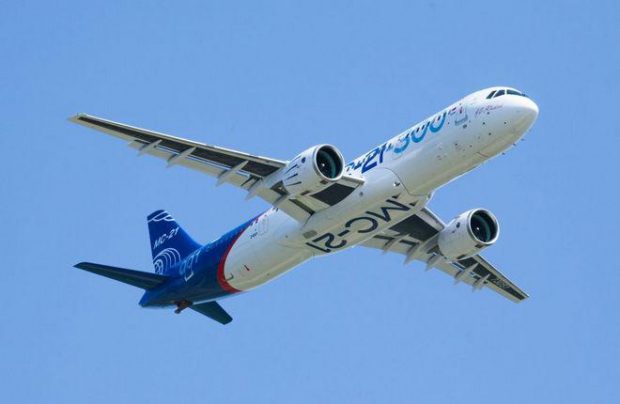 The first flying prototype of Russia’s new Irkut MC-21-300 single-aisle airliner performed its first flight with the landing gear retracted on 19 June, OEM Irkut Corporation reports. “This paves the way for more complex flight testing,” Irkut President Oleg Demchenko commented. Now that the aircraft has been demonstrated to fly safely with its gear retracted, it can be tested for the entire envelope of design speeds and altitudes.

The MC-21-300 flight program was launched on May 28. The first flight was meant to tested the aircraft’s stability and controllability, as well as looking at the powerplants’ behavior. The second flight, which took place on June 14, tested the airliner’s take-off and landing parameters and evaluated the performance of its systems. The third flight occurred on June 15, checking the operation of the wing flaps in all modes from take-off to cruise flight.

The prototype currently in testing is powered by a pair of US Pratt&Whitney PW1400G geared turbofans. The aircraft is expected to be certified to Russian standards in 2019, to be followed by EASA certification in 2020. It is understood that the type will receive the Russian-made Aviadvigatel PD-14 as an engine option at some point later.