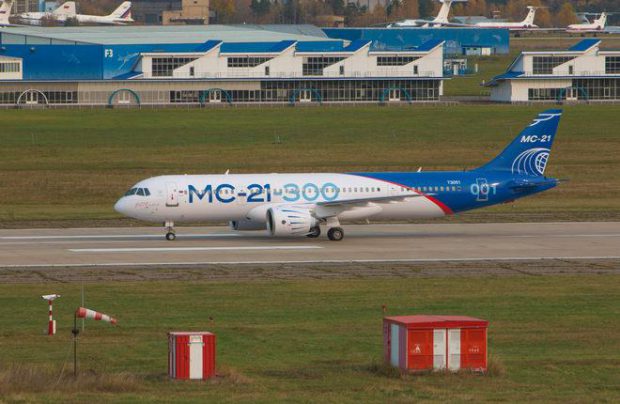 It took the airliner six hours to fly to Zhukovsky from Irkutsk in Siberia (a distance of about 4,500 km). The aircraft flew at an altitude of 10,000 meters. During the certification tests the prototype, which is representative of the MC-21-300 baseline version, will be kept in a dedicated hangar on the territory of Yakovlev Design Bureau’s engineering center. Oleg Demchenko, first vice-president and chief designer of Irkut Corporation, says the hangar is equipped to acquire, process, and store flight information.

The certification tests follow two stages of factory flight tests. The first stage continued from early May to the end of June this year; the second one began in September. During this period the prototype was tested in various flight modes, its performance envelope was expanded, and minor changes were introduced into the aircraft’s software and systems.

The first flying prototype will be joined by a second one in December. Both are equipped with US-built Pratt & Whitney PW1400G engines. The Russian Aviadvigatel PD-114 is expected to be made available as an option later on. The baseline MC-21 variant is to be certified in 2019. The manufacturer has landed 175 orders for the type so far.