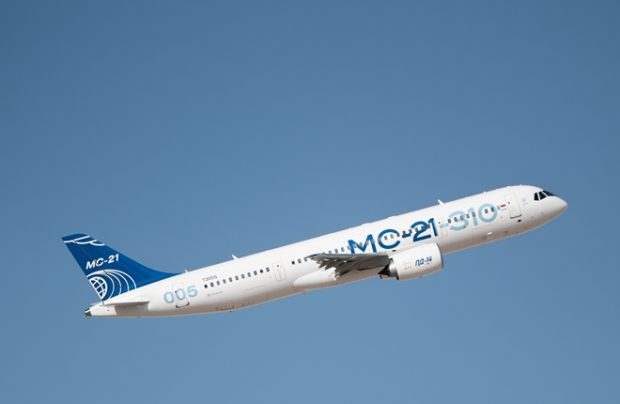 In almost 20 months that have elapsed since Russia’s advanced narrowbody airliner MC-21-310 powered by Russian-made PD-14 turbofans took to the skies on December 15, 2020 – the aircraft has completed 100 flights, according to Rostec (parent of United Aircraft Corporation, which is turn is parent of MC-21’s producer, Irkut).

The aircraft is now undergoing a series of certification flight tests, aimed at confirming its performance with PD-14 turbofan engines. The flights are performed at the premises of Gromov Flight Testing Institute in Zhukovsky, near Moscow. They are expected to result in replacement of Pratt & Whitney P&W1400 engines with Russian-made PD-14, a major shift for the programme.

The original МС-21-300 powered by PW1431G and with the wing made with imported composite materials, won its type certificate from Russia’s aviation authority Rosaviatsiya in December 2021.

At the moment, just one -310 prototype (msn 73055) is involved in flight testing. According to Rostec, another aircraft (msn 73051) will join the programme “soon”. The latter is the first flying prototype, originally built with PW1431G, but re-engined at a later stage. Having two aircraft doing the tests should enable the tests to be completed within the tight schedule. In April, UAC’s general director Yury Slyusar said that the company’s target was “to complete flight tests in 2023 and start deliveries in 2024, in completely Russian-made setting, to Russian airlines”.