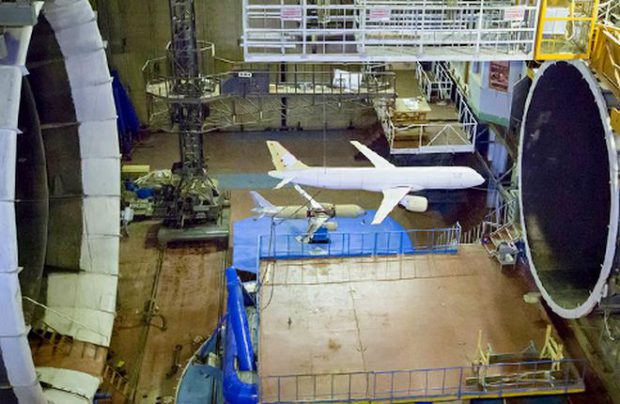 The second set of tests for flutter, a dangerous elastic effect experienced by aircraft in flight, have been carried out on a test model of the new narrow-body MC-21 airliner at the Central Aerohydrodynamic Institute (known by the Russian acronym TsAGI), outside of Moscow. The experiment was carried out under the order of the aircraft manufacturer, Irkut Corporation, in a large subsonic aerodynamic chamber at the institute.

A TsAGI representative reported that the one-to-seven scale model of the aircraft was created by a joint project with participation of the Irkut Corporation and MiG Corporation. The model has a wingspan of five meters and a weight of 300kg. It was subjected to simulated 1,100 kilometers per hour wind conditions, which, among other things, allowed the critical flutter speed and the rigidity of the engine pylon to be studied.

“The results of the tests reveal that the MC-21 does not show any signs of the dangerous phenomenon known as flutter when operated under normal flight conditions,” said a spokesperson for TsAGI. However, final conclusions about the aircraft’s safety won’t be made until the aircraft prototype has been tested. Such tests are scheduled for the end of this year.

This MC-21 prototype is already being tested at TsAGI. As a part of the first stage of static tests, it will be tested under conditions that do not exceed normal flight envelope, and as a second stage, under extreme conditions. If the prototype manages to pass these tests, it will be cleared for flight. The MC-21 flight tests are expected to be carried out at the beginning of next year.