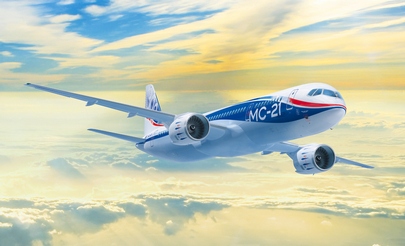 Russia’s advanced Irkut MC-21-300 narrowbody airliner is expected to commence flight tests towards the end of 2016, Russian Minister of Industry and Trade Denis Manturov has said in an interview to the TASS news agency. Earlier, the first flying prototype was expected to perform its maiden flight in the second quarter of 2016.

According to Manturov, the MC-21 rollout, originally scheduled for late 2015, has also been postponed. It is now expected that the airliner will be shown to the public in the middle 2016.

“We need to achieve the requisite high quality of the new composite technologies first, and I consider the risk of launching an uncompleted aircraft to be totally unjustified,” Manturov commented.

The MC-21 is being developed, and will be manufactured, by Irkut Corporation, a part of the United Aircraft Corporation (UAC). In early December 2015, it was reported that Irkut had completed assembly of the first prototype’s fuselage, to be followed by wing-body mating.

On December 29, representatives of the Central Aerohydrodynamic Institute (TsAGI) reported completion of the first stage of certification strength tests on the production version of the MC-21-300’s composite tailplane torsion box.

The MC-21 will be initially powered by Pratt & Whitney PW1400G-JM turbofan engines. Later on, operators will be able to choose the Aviadvigatel PD-14 powerplant, under development at Russia’s United Engine Corporation (UEC). Flight tests of the Russian engine commenced in fall 2015.