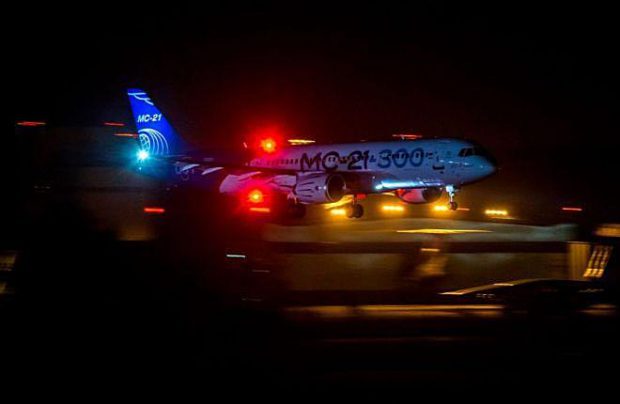 Russia’s advanced narrow-body MC-21-300 passenger aircraft has successfully made its first night flight, approach and landing under the cover of darkness. The tests were conducted at the aerodrome of Zhukovsky-based Gromov Flight Research Institute, reports the aircraft’s original equipment manufacturer (OEM), the Irkut Corporation (part of United Aircraft Corporation).

The checks also included the aircraft’s navigation, landing and exterior lighting equipment, as the prototype made several low-passes at a range of altitudes over the runway, approaching from both directions. All systems functioned correctly throughout the flights, the OEM asserts.

A second flight prototype relocated to Zhukovsky earlier this summer and both the MC-21-300s currently undergoing flight tests are powered by Pratt & Whitney PW1400G geared turbofan engines. Tests with aircraft powered by Russian-made PD-14 engines, which will be offered as a purchase option, will start later on.

The third prototype is now undergoing static tests at the Central Aerohydrodynamic Institute (TsAGI) at Zhukovsky, whilst a further three MC-21-300s are currently being assembled at the Irkutsk Aviation Plant division of Irkut. Two will join the flight tests programme, whereas the last one is designated for fatigue testing, a process which is scheduled to start before the end of the year.

UAC’s president Yuriy Slyusar has recently announced that the US$96.1 million list price of an MC-21-300 will be lower than its western-built Airbus A320neo and Boeing 737MAX competitors. In addition he promised that the new Russian alternative will save operators up to $2 million annually on lower operating costs.