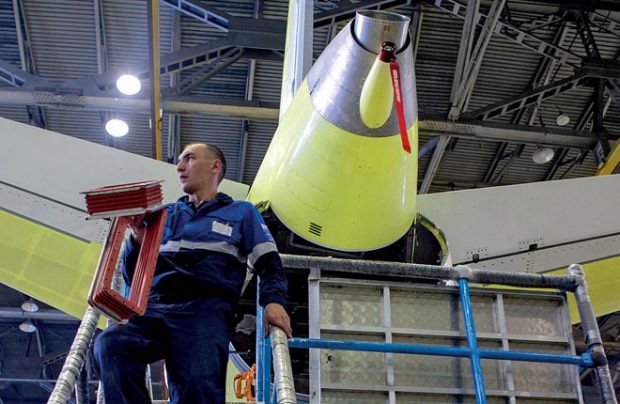 Aerosila, a Russian aerospace supplier headquartered in Stupino outside Moscow, is presenting its TA18-100 auxiliary power unit (APU) at MAKS 2017. A company spokesperson told Russian Aviation Insider that a modification of the unit, the TA18-100C, is already being test-flown on the Sukhoi Superjet 100 (SSJ100) regional airliner, on which it is intended to replace the original Honeywell RE220 APU.

The SSJ100’s air bleed system and full authority digital engine control (FADEC) system had to be modified in order to accommodate the new APU. A supplemental type certificate for the Superjet with the new unit is expected to be issued in 2019. An application has been sent ahead to EASA in order to simplify European validation. In the meantime, TA18-100 production has already been launched at Officine Meccaniche Irpine (OMI) in Lacedonia, Italy. This year the Italian company will complete the creation of a testing base for the unit. It will also provide TA18-100 maintenance services.

The TA18-100 is also planned to be installed on the Mil Mi-26T2 heavy transport helicopter, whose current APU is the heavier and less powerful TA-8B model. The new unit will bring the rotorcraft’s air-start altitude up to 11,500 m. In addition, Aerosila is currently in negotiations to install the TA18-100 on board the future Russian-Chinese heavy helicopter.