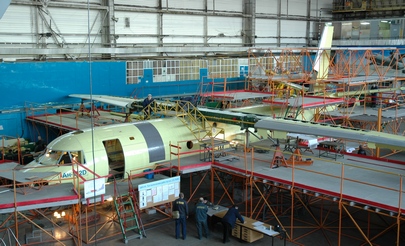 Assembly of the AN-132D transport aircraft

Toulouse-based Liebherr-Aerospace will supply the integrated air management system for Antonov’s new aircraft, the An-132D. Representatives from the Ukrainian airframer and Liebherr-Aerospace signed the contract on June 1, 2016, at the ILA Berlin Airshow.

According to the agreement, Liebherr-Aerospace will design, supply and service the air management system, including the bleed air system, cabin pressure control and anti-ice system, for the first aircraft demonstrator An-132D. The contract covers the delivery of the systems for four aircraft to be used for flight tests at Antonov’s facility in Kyiv.

Liebherr-Aerospace is not cooperating with Antonov for the first time. It also supplies the cabin pressure control systems for the An-74 and An-140, and the integrated air management system for the An-148, An-158 and the An-178 prototype.

The An-132D is a demonstrator version of the new An-132 turboprop light transport, a modernized and Westernized version of the Soviet-era An-32/An-26 regional aircraft.

Antonov has signed an agreement with the Saudi Arabian National Science Agency, the King Abdulaziz City for Science and Technology (KACST) and Taqnia Aeronautics for the development and manufacturing of the An-132 airlifter in June 2015.

Destined for civil and military markets, the An-132 will be powered by Pratt & Whitney Canada PW150A engine and equipped with Honeywell avionics. Last year, Antonov estimated a market for as many as 200 aircraft in the An-132 size class between 2018 and 2025.