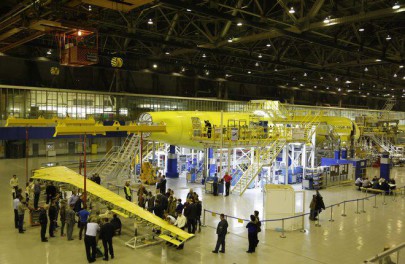 The left-side half-wing for the first prototype of Russian new-generation narrow-body aircraft, the MC-21, has been delivered to the assembly line in Irkutsk, where it will be attached to the fuselage, the aircraft’s producer Irkut announced yesterday. The composite wing was produced by the Ulyanovsk-based company AeroComposite.

Work is currently underway to attach the right half-wing, which was delivered in January, to the aircraft. At the same time, aircraft systems are being installed on the prototype, the spokesperson for Irkut commented.

AeroComposite is currently assembling a composite wing box, which will undergo fatigue and static testing at Central Aerohydrodynamic Institute (TsAGI). It is also producing wings for another MC-21 prototype that will be used for static tests.