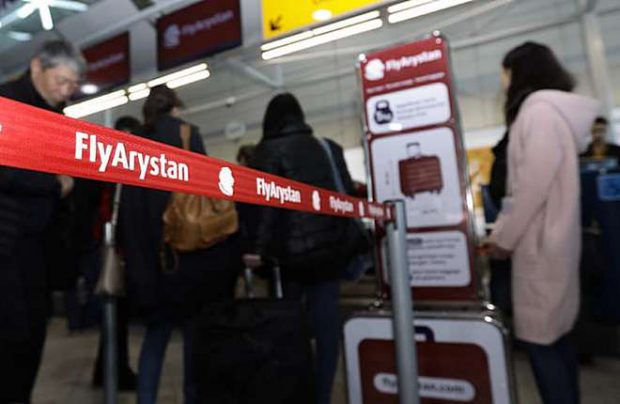 FlyArystan claims its on-time performance achieved a notable 92 per cent, and its seat load factor reached 93 per cent (FlyArystan)

FlyArystan, Kazakhstan’s first low-cost carrier (LCC), sold more than 100,000 tickets to the six domestic destinations: Nur-Sultan, Taraz, Uralsk, Karaganda, Pavlodar and Shymkent, the first four of which it operates from May 1.

Of the total number of tickets sold, 35 per cent of purchasers have already taken their flights and 65 per cent plan to do so in the near future. The airline says that, in less than a month, more than half of the tickets were sold at a minimum price of 10,000 tenge (US$26).

On the operational side, the start-up says its on-time performance achieved a notable 92 per cent, and its seat load factor reached 93 per cent. “We are glad that Kazakhstanis [are able] to fly more often and can now plan their holidays several months in advance. Due to the low prices of the low-cost airline, many customers transferred from trains and cars to airplanes,” notes Zhanar Zhaylauova, FlyArystan’s sales and marketing director. “Therefore, we are looking forward to May 30 to carry out the first FlyArystan flight to Pavlodar and Shymkent.”

Almaty-based FlyArystan, the central Asian country’s new low-fare airline, which took to the skies on May 1, is a division of Air Astana and currently operates a fleet of two six-year-old Airbus A320 aircraft configured with 180 seats, with two more expected to join its fleet by the year-end. It is hoping to carry some 700,000 passengers in 2019.

By 2022, the airline’s fleet will increase to 15 aircraft, it is planned, with aircraft to be based in different cities of the Republic of Kazakhstan.