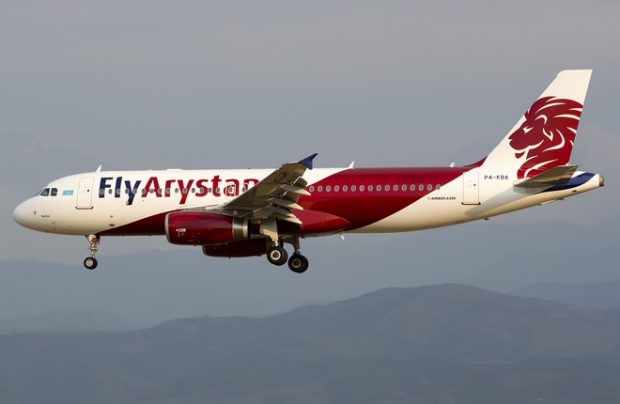 FlyArystan, Kazakhstan’s only low-cost carrier (LCC), is planning to operate 10 aircraft next year to support a five-fold increase in the number of routes served by the start-up airline.

These details were revealed in a media statement announcing two new routes for the four-month-old, Almaty-based off-shot of the country’s flag carrier Air Astana.

From October 3, FlyArystan will add daily flights from the capital city of Nur-Sultan to Kostanay and to Shymkent. Kostanay is a new destination for FlyArystan, but it is hoped that there will be several more routes launched in the future from “this key regional city”, the airline says, as it targets the setting up of multiple bases across the central Asian country.

Launching flights between Nur-Sultan and Shymkent means expansion of the LCC’s route network from Kazakhstan’s third largest city. FlyArystan started flights from Shymkent to Almaty on May 30th and, based on the initial success of those daily flights, the LCC has now announced the doubling of capacity and destinations to Shymkent. In less than three months, FlyArystan has flown more than 30,000 passengers on its initial route to Almaty. With the additional second daily flight, FlyArystan will provide the city with more than an additional 130,000 seats annually departing from/to Shymkent. This equates to an increase in capacity for the southern metropolis of about 15 per cent of the total traffic at the airport in 2018.

Janar Jailouva, FlyArystan’s director of sales and marketing, says “According to the data of the Civil Aviation Committee of Ministry of Industry and Infrastructural Development of the Republic of Kazakhstan, since FlyArystan started operating its flights, passenger traffic at Shymkent airport has increased by an average of 27 per cent. This increase only reflects the initial flight to Almaty and we are sure that with the advent of new services to Nur-Sultan, this number will increase significantly.”

FlyArystan started commercial services on 1st May 2019 and currently operates two all-economy, 180-seat Airbus A320 aircraft. To meet the growing demand of budget flying, two additional A320s will be joining the FlyArystan fleet in the fourth quarter of 2019.

It is expected that, during 2020, FlyArystan will enlarge its fleet to 10 Airbus A320 aircraft, a move which will support a five-fold increase in the number of routes served by the LCC, operated from multiple aircraft bases in Kazakhstan. Its first such regional base was identified as Karaganda’s Sary-Arka Airport (IATA: KGF) where, in the second quarter of 2020, the discounter plans to locate two aircraft.