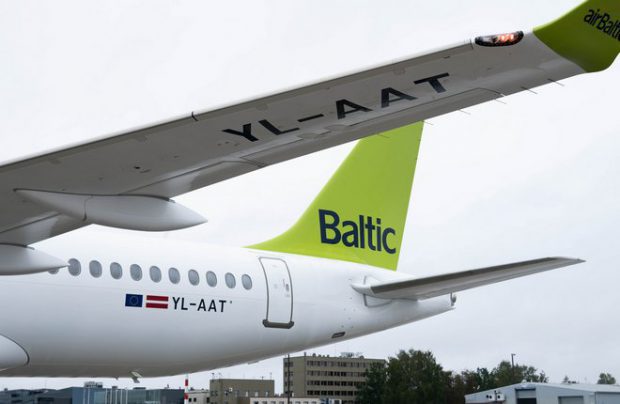 The aircraft, registered as YL-AAT, was welcomed on September 21 at carriers’ Riga airport base (airBaltic)

Latvian hybrid airline airBaltic took delivery of its 20th Airbus A220-300 jet, thus finalizing the original A220-300 (formerly the Bombardier CS300) order, a first step to becoming an all-A220 operator by 2022.

By the end of 2019, Baltic’s biggest scheduled airline plans to have a total of 22 A220-300s of which two will be already from the additional May, 2018 order for purchase of 30 A220 jets with options for an additional 30 aircraft of the type.

airBaltic aims to minimize complexity and benefit from the additional efficiency of the A220-300 which will be the only jet type operated by airBaltic by the end of 2022.

“The decision to order the aircraft in 2012 and then become the launch operator of the most modern jet aircraft the Airbus A220-300, was a successful one and we have benefited from it greatly. airBaltic is now on a stable growth path because we have made many important steps for our further development, and our fleet modernization has been one of them. In the future our fleet will consist only of Airbus A220-300 aircraft and will be one of our strengths and competitive advantages,” says Martin Gauss, chief executive officer of airBaltic.

Thus far, airBaltic has carried over 3.75 million passengers on the Airbus A220-300 aircraft with its every second passenger flying on the aircraft. Airbus A220-300’s have completed more than 37,000 flights and flown over 94,000 block hours, detailed the airline in a statement.

During the first eight months of 2019, Latvian flag carrier has transported a total of 3.37 million passengers or 22 per cent more than last year.