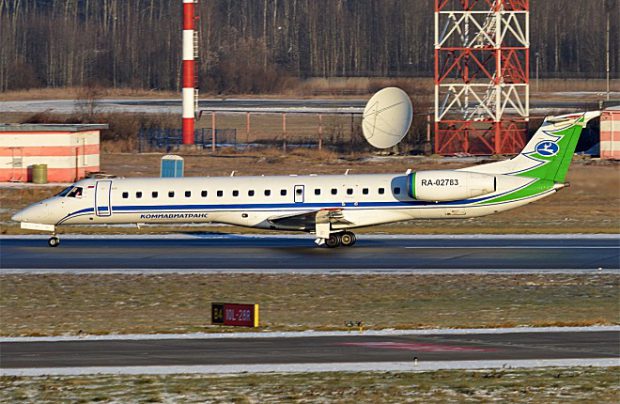 Russian regional airline Komiaviatrans has transferred its five-strong fleet of Embraer ERJ145LR jets onto the Russian aircraft register. It has also contracted UTG Aviation Services to provide maintenance on the aircraft at its Pulkovo airport (St Petersburg) and Domodedovo airport (Moscow) line stations.

The maintenance company has recently extended its FAP-285 approval, adding the Embraer 135/145 to its capability list, Sergey Ivanov, Komiaviatrans’s deputy director for development, has told Russian Aviation Insider. The heavy checks on the airline’s Embraer fleet are currently provided by Slovenia’s Solinair, which is also planning to obtain its own FAP-285 approval from the Russian aviation authorities before the end of this year.

All the Embraer ERJ145LRs currently operated by Komiaviatrans are owned and leased to the airline by Ireland-registered GTL Avia, which is part of Russian Gaztechleasing. Until recently, the fleet was listed on the Bermuda Aircraft Register and the initiative to transfer them onto the Russian registry stems from GTL Avia and will eventually enable lease payments to be settled in Russian currency.

Since the gradual devaluation of the Russian rouble, the lease payments have become excessively high for an airline that currently doesn’t generate any hard-currency revenue, being banned from operating international flights. So, to stabilise the payments, the decision was taken to register the aircraft in Russia and thus calculate the lease fees in roubles, Ivanov explains. The rouble payments will be possible only after the contract with a new, unspecified, lessor is signed, he adds.

“The main advantage of the Russian registry is that you deal with the Russian aviation authorities, which is less costly, and it happens within the same time zone, which is important for time-critical decisions,” Ivanov explains. “Besides that, when the fleet has different types of aircraft, some of which are on the Russian and others on the Bermuda registry, all of the documentation is doubled. That means that for the same criteria we have to be compliant with the regulations of two different countries, which is challenging sometimes.”

Russian aviation authorities have initiated an active campaign calling for the transfer of aircraft registered elsewhere onto the national register.

Komiaviatrans’ active fleet currently consist of three 50-seat Embraer ERJ145LR regional jets, two 19-seat L-410UVP-E20 turboprops and a mix of 18 Mil Mi-8 helicopters in various modifications. The company is made of the airline and seven regional airports and is owned by the administration of Komi Republic – a federal dominion of the Russian Federation located in the northwest of the country – whose industries include oil processing, timber, woodworking, natural gas and electric power industries.