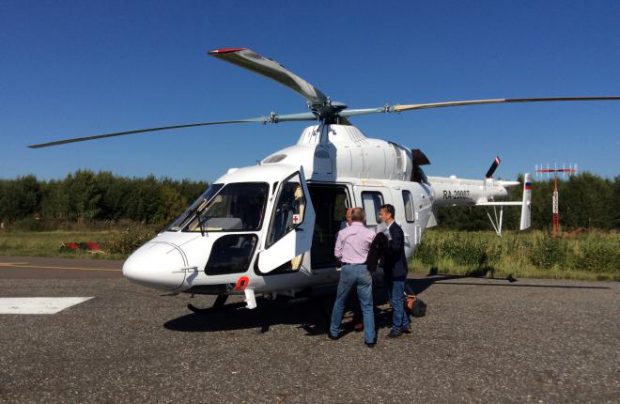 One of the planned upgrades should extend the rotorcraft’s operating temperature envelope (ATO.ru)

Kazan Helicopters, a subsidiary of Russian Helicopters, is planning to upgrade its Ansat light rotorcraft. The news was announced at the annual conference of Ansat operators, which was held in Kazan on September 14.

The upgrades will be made to the version equipped with a conventional hydromechanical flight control system.

The OEM’s chief designer, Anton Bushuev, explains that the Ansat is planned to be certified to operate in an expanded range of outside air temperatures, up to +50°С: “We are now sending a helicopter to Pakistan for hot-climate flight tests. The program will comprise 50 flights, in the course of which we hope to extend the operating temperature envelope to +50°С unless any restrictions apply. We expect to complete these tests before the end of this year.” Earlier the helicopter was certified to operate in cold temperatures, down to –45°C.

The R&D effort to design a vibration dampening system for the Ansat has largely been completed. Two design options have been selected; these will be delivered to Kazan Helicopters before the end of September. Both options will be made available to operators: the four-unit variant for VIP and medevac aircraft, and the more conventional three-unit system. Dmitry Sergeev, adviser to the Russian Helicopters CEO, says the system ensures vibration dampening levels comparable to those offered by the VIP variant of the AgustaWestland AW139.

Another modification comes in the form of an external sling, to be certified in Q2 2018. The OEM chose American Onboard Systems as the supplier. The sling-equipped rotorcraft will be capable of lifting 1.5 tons of freight externally, bringing its overload weight up to 3,900 kg.

Speaking of modernization plans for 2015, Bushuev mentioned an Ansat prototype with an all-composite nose section. A prototype has successfully passed bird strike tests at Baranov Central Institute of Aviation Motor Development. Flight tests should be carried out in Q1 and Q2 2018.

The aircraft’s tail boom will be equipped with new empennage, which is expected to improve stability in different fight modes. The use of composites should prolong the helicopter’s service life.

Also next year, the Ansat is to be outfitted with an upgraded modified information and management system. This will enable IFR flights in adverse weather, among other things.

One of the requests voiced by operators at the conference was for the Ansat’s range to be expanded. Bushaev remarked that Kazan Helicopters is working on this in cooperation with the French fuel system supplier Aerazur. The first phase of the project, scheduled for 2018, will involve tests on shock-resistant fuel tanks. This should extend the Ansat’s 510-km baseline range by an extra 30 km.

In 2019, a fuel system with a 700-liter main tank and an auxiliary tank is to be designed. It will extend the Ansat’s range to 1,000 km. Its installation will require the introduction of a new main rotor blade profile; the helicopter’s MTOW will need to be increased by 150 kg to 3,750 kg.

The fly-by-wire version, dubbed Ansat-U, which has not yet been certified to civilian standards and is currently operated by the Russian military, will also be subjected to upgrades. Its anti-icing system will be tested in December and January, and is expected to be ready for operational entry next year. The technology could then be transferred to the civil version.

Several options are planned for the medevac version of the Ansat. These will include a humidicrib, whose prototype is currently under development.