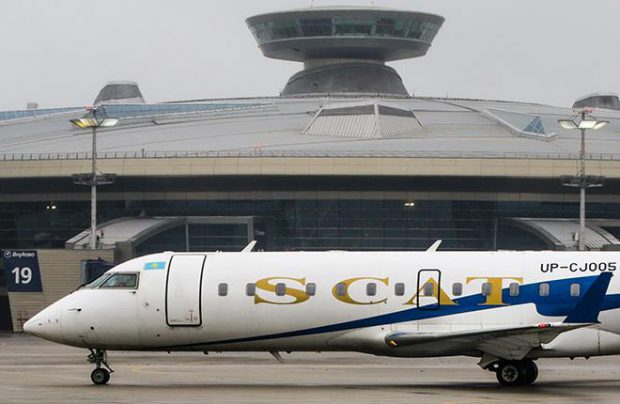 SCAT is considering aircraft of up to 150 seats capacity to increase its fleet (Leonid Faerberg // Transport-photo.com)

“We have been long evaluating Sukhoi Superjet 100 and we still do. However the current commercial offer we got, doesn’t suit us,” Suytnik said.

Two years ago, at MAKS-2015 air show SCAT and Russia’s GTLK State Transport Leasing Company signed a memorandum on operational leasing of 15 SSJ 100s. The carried chose the all economy cabin configuration for 103 passengers. The Russian jet had been chosen as a part of the Kazakhstani operator fleet renovation program through 2020.

In August of the same year the Kazakhstani authorities declared the transfer to floating tenge exchange rate, making the national currency and US dollar exchange rates slump by 26%. Because of the sharp tenge devaluation SCAT management decided to hold up the fleet expansion plans.

In summer 2017 the carrier became the country’s fastest developing company with its seven months passenger traffic skyrocketing by about 48% compared with the same period of 2016 (1.01 million passengers served). The same August SCAT received a permit to fly to EU countries. This allowed the company to revive its fleet expansion plans.

“This year the high necessity to expand the fleet returned. A highly successful summer allowed us to have a more positive outlook: we understood that the economic situation and the purchasing power improved. We saw that given the existing flight frequency and destination development, we have an opportunity to pursue our expansion plans,” Alexandra Suytnik said. “This year we have already received a Boeing 737, which is serving our destinations across Kazakhstan and CIS countries. Next year we are planning to purchase several aircraft. I cannot give you an exact number. The winter season will show it all”.

Marketing VP also noted, that the company is equally considering any manufacturers’ aircraft of up to 150 seats. The aircraft should be capable to serve flights to Russia, China, Europe and Central Asia.

“We have lots of offers. Embraer has offered its E-Jet E2, Boeing has initiated talks with favorable conditions on 737MAX and NG aircraft. The program to transfer on a new aircraft type should be a weighed decision, as it is implying big investment,” Suytnik added. SCAT management is now determining the company’s strategy until 2020.