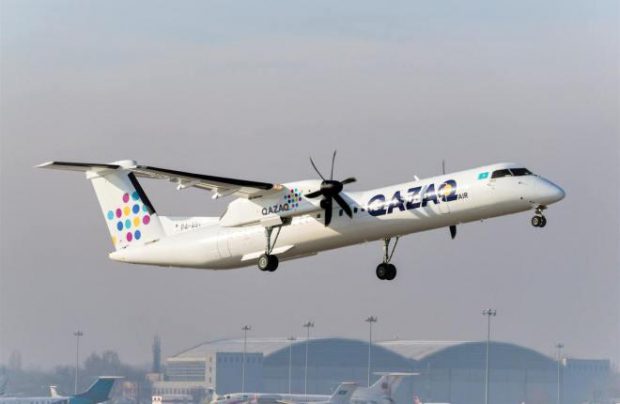 State-owned young Kazakh regional airline Qazaq Air is continuing to demonstrate strong operational results, including a 94 per cent year-on-year traffic improvement in the first quarter of 2018.

In the first three month of the year the airline served 76,500 passengers, with the average seat load factor growing to 76 per cent.

Sergey Khetsuriani, Qazaq Air’s PR director, told Russian Aviation Insider that the growth was stimulated by a 54 per cent increase in the numbers of flights – as well as better optimisation of the airline’s route network.

The current network includes 11 destinations across Kazakhstan and a further expansion strategy is based on developing regional routes from larger hubs. In line with this, compared to Q1 2017, the airline experienced a five-fold increase in the number of flights from Astana, the country’s capital. In the same period, the number of flights from Atyrau to destinations in the west of Kazakhstan increased by 73 per cent.

Since its launch in August 2015 Qazaq Air has served more than 530,000 passengers, and in doing so became the growth leader in the Kazakhstan air travel market. Last year alone its traffic reached 251,000 passengers, exceeding the 2016 results by 53.3 per cent. One factor, which contributed to the traffic numbers growth, was the launch of charter flights to Issyk-Kul airport, a resort destination adjacent to the picturesque lake in neighbouring Kyrgyzstan.

The outlook for this year is optimistic, the airline insists, expecting at least 20 per cent growth to reach a targeted 300,000 passengers. Inaugurating international flights to destinations in the south of Russia and Central Asia are the next move. Several international routes will be launched before the end of the year, Khetsuriani confirms.

To cater for its ambitious network expansion plans, Qazaq Air, which is 100 per cent owned by state-run Samruk-Kazyna Fund, is expecting to take delivery of two new Bombardier Q400 NextGen aircraft in the spring of 2019. The fleet will thus extend to five aircraft of the type. The airline currently operates three 78-seat-configured Canadian-built turboprops, with an average age of less than three years.