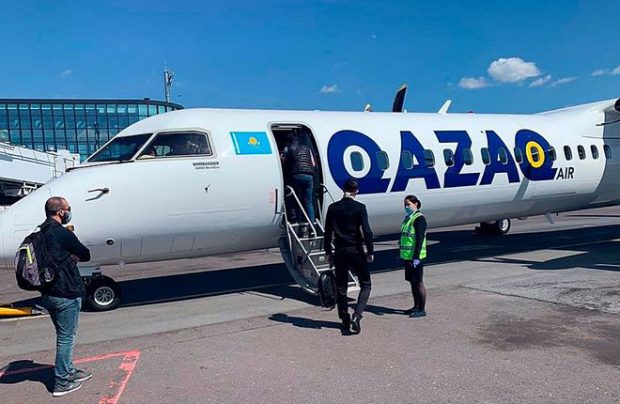 Air Astana, SCAT Airlines and Qazaq Air are resuming domestic scheduled flights on 12 May, from the Kazakh cities of Almaty and Nur-Sultan to regional centres across Kazakhstan, following the lifting of the Covid-19 pandemic-related national state of emergency.

Three of the country’s larger airlines cautiously re-launched the central Asian country’s air transport industry on May 1 with flights on just one route, the nation’s key air link between the capital city of Nur-Sultan (previously Astana) and Almaty. Kazakhstan has been under a stringent quarantine regime for more than a month including the complete grounding of all domestic air travel since March 22.

While the Civil Aviation Administration of Kazakhstan (CAAKz) stresses that a tight antiseptic regime will be maintained on all flights, the Chief Sanitary Doctor of transport at the Ministry of Health of the Republic of Kazakhstan has cancelled the requirement for passengers, airport staff and the flight and cabin crews to present a COVID-19-negative certificate, as well as lifted restriction on the use of the ‘middle seat’ to create social distancing while onboard planes, just days after IATA officially declared that it does not support mandatory social distancing on aircraft that would leave middle seats empty.

However, Qazaq Air says it will still arrange for passenger seats to be allocated in staggered rows on its Dash-8-Q400NG turboprops when passenger loads are not high.

All three airlines are emphasising their compliance with other key healthcare requirements, including temperature screenings on departure, social distancing at the airport, the mandatory wearing of facemasks and the disinfection of cabins before each flight.

Air Astana reveals that on-board meals will be provided “in disposable dishes in both classes of service.” After dining, passengers will then be required to put on their masks again “and keep them on for the duration of the flight,” it adds.

Elsewhere in the country, FlyArystan, the nation’s only low-cost budget airline, which is a division of flag carrier Air Astana, remains tight lipped about when it is likely to re-launch operations, whereas Bek Air’s Air Operator’s Certificate was withdrawn on April 17th following safety concerns after a crash in December 2019.

Prior to the Coronavirus outbreak, between them, Kazakhstan’s airlines operated 540 weekly flights, covering 45 domestic and 442 international routes to 97 destinations. During the lockdown, 99 per cent of international and 100 per cent of domestic services were suspended and nearly 70 per cent of the industry’s personnel have been on unpaid leave.