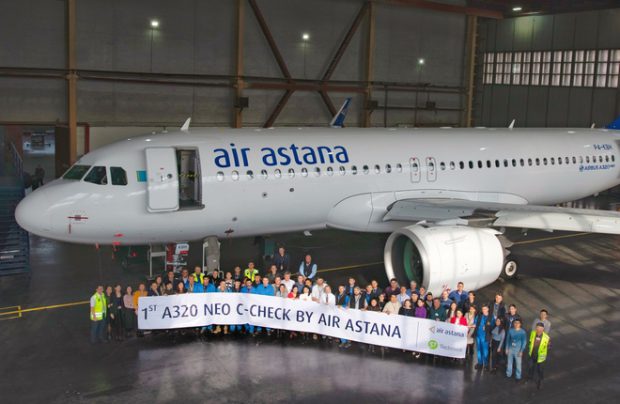 Kazakhstan flag carrier Air Astana has performed its first in-house heavy maintenance aircraft examination at its base. The C-check, on an Airbus A320neo with registration P4-KBH, was completed under Air Astana’s own EASA Part 145 certificate at its Almaty Airport base in November 2019, with the close support of Russian MRO specialist S7 Technics.

To support its key customer, S7 Technics placed six experts – a team consisting of a project manager, deputy production manager, head of the department and three engineers – at Almaty.

Under the guidance of the S7 Technics specialists, the in-house C-check took 10 days to complete and saw Air Astana engineers and support teams successfully carry out more than 170 individual safety check actions, as well as some minor cabin restoration work. In preparation for what is regarded as a significant maintenance achievement over the past 11 months, Air Astana engineers received training at S7 Technics’ Moscow base.

“While Air Astana’s staff were working on their first C-check, the S7 Technics team supervised directly at the customer’s facility in Almaty,” explains Alexey Zimin, project manager at S7 Technics. “Our team did not perform any procedures on the aircraft, but they shared their expertise and best practices on planning and executing actions, on coordinating actions between different departments and on filing reports.”

S7 Technics and Air Astana have been evolving their cooperation over the last three years. In 2018 the two companies signed a five-year contract for the airline’s aircraft to be maintained in Russia and agreed a memorandum of understanding to establish C-check maintenance at Air Astana’s bases at Almaty and Nur-Sultan. Under the agreement, S7 Technics provides consulting services as well as training of Air Astana specialists to expand their repair capabilities. The partnership involves the sharing and exchange of tools and equipment between the Air Astana maintenance base and S7 Technics’ bases.

The airline sees the possibility of providing maintenance for third-party customers in the future.

“Our primary goal is to minimise airline costs by independently performing heavy aircraft maintenance. With the expansion of our experience and capability, we also see the possibility of carrying out maintenance work for external customers. This in turn will increase revenue and offset part of the cost of performing our own C-checks. We expect this to happen in the coming years,” says Keith Wardle, vice-president of maintenance and engineering at Air Astana. The Kazakh airline is the launch operator of A320neo in the CIS and currently has six aircraft of the type in its fleet.

“This is the first such [cooperation] project in the history of S7 Technics. But there are [numerous] examples in the aviation industry where a provider helps a customer develop its own competencies. For an airline of the scale of Air Astana, the development of its own competencies in the field of basic maintenance is not a whim, but a logical step to reduce costs,” insists Igor Panshin, S7 Technics’ deputy general director of marketing and sales. “We believe that this partnership between Air Astana and S7 Technics really makes sense in this respect. The airline benefits from competent support from us, whilst we have won a valuable customer. While Air Astana’s base at Nur-Sultan is building its capabilities in A320neo maintenance, we are continuing our cooperation in other ways, including heavy checks on other types of aircraft operated by the Kazakh airline, at S7 Technics sites in Russia.”

Air Astana says it will significantly increase its maintenance capability at the Nur-Sultan base ready for the first C-check there in 2020.