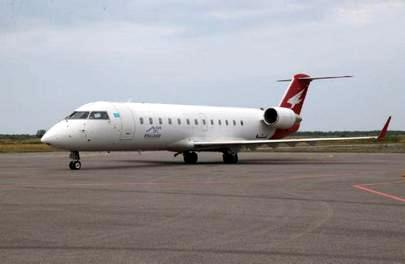 Starting on June 24, and until September 27, SkyBus will operate three weekly flights between Tbilisi and Batumi on a Bombardier CRJ100LR. The 280 km route is one of the most popular in Georgia, according to TV Georgia, operator of both airports.

Air Transport Department of Georgian Civil Aviation Agency explained to Russian Aviation Insider that SkyBus was granted a temporal permit for performing charter flights on this particular route, adding that allowing a foreign operator to fly domestic routes in Georgia is not extraordinary practice. Azerbaijani AZAL’s operating flights between Baku, Tbilisi and Batumi is one of the earlier examples.

A representative of SkyBus, Oleg Nosov, told Russian Aviation Insider that for the duration of the charter program the airline will base two of its own CRJ100LRs in Batumi. To support the operations the carrier opened a line maintenance station at the airport.

The Batumi – Tbilisi route is not going to be SkyBus’s only activity on the Georgian market. Starting from the beginning of June, the airline is operating charter flights from Batumi to eight destinations in Kazakhstan, including Astana. It expects the traffic on these routes to reach 7,000 passengers by the end of the program.

Located on the coast of the Black Sea, Batumi is one of Georgia’s main tourist destinations. From January to April this year, 8,700 Kazakh tourists visited Georgia, up 28.6% to last year. Taking advantage of the growing demand two other Kazakh carriers, Air Astana and SCAT opened new flights to Georgia.

“Last year we tried Georgia as leisure destination and we noted that this country’s tourist potential is huge,” SkyBus director Sergey Yegorov told Kazkhstan’s Business Information Center. “It is in no way a substitute for Turkey or Egypt, it is a totally different country, with its own traditions and the Black Sea,” he explained, noting that the country offers relatively inexpensive accommodation. Many travel companies make advance reservations, knowing that there will be intense interest from passengers, he said. “Our capacities on flights from Aktau, Aktobe, Karaganda and other cities are completely sold out to travel companies. We are thinking of launching additional flights.”

SkyBus received its Air Operator Certificate from Kazakhstan’s Civil Aviation Committee in January 2016. Yegorov pointed out that the carrier was founded in 2008 and operated until 2012. The decision to relaunch the airline was made in late 2015.

“We bought the stock from the previous owners and did the certification process all over again, received new international licenses and entered Kazakhstan’s market. Initially we invested about $6 million into the company to modify aircraft, train staff and hire administration,” Yegorov said, mentioning that in 2016 SkyBus intends to expand its fleet with long-haul aircraft.