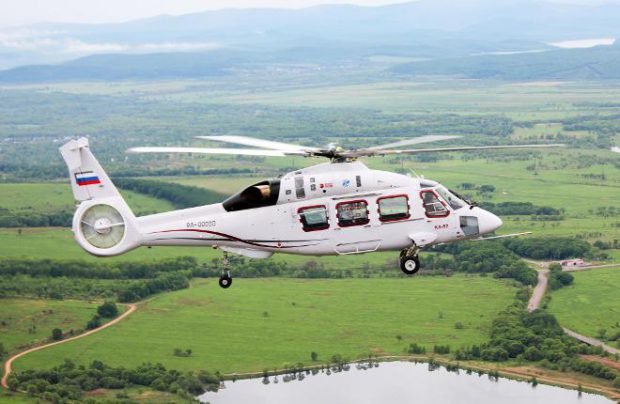 The helicopter was airborne for 15 minutes (Russian Helicopters)

The Kamov Ka-62 medium multirole helicopter has performed its maiden flight, Russian Helicopters announced at the HeliRussia exhibition in Moscow.

The flying prototype lifted off from the airfield of Arsenyev-based Progress Company on May 25, more than a year after the first hovering test.

During the 15-minute flight the aircraft circled the airfield once, accelerating to 110 kph. The prototype was being tested for handling and stability, commented Russian Helicopters CEO Andrey Boginsky. Also tested were the helicopter’s engines, onboard equipment, and power supply system.

The Ka-62’s flight test program was launched on April 28, 2016, when the helicopter got airborne in hover for the first time. Before proceeding to actual flights, it performed multiple engine runups and hovering tests. The company is employing several flying prototypes, which will enter certification trials shortly.

As announced earlier, the Russian Ministry of Industry and Trade sees the country’s defense and law-enforcement sectors as the launch customers for the Ka-62. Russian Helicopters is planning to run a market study to see if the type has any potential demand among civilian operators.

Unlike Kamov’s other helicopter models, which historically have coaxial main rotors, the Ka-62 features a standard rotary-wing configuration with a single main rotor and a tail rotor. The airframe incorporates a considerable share of composite materials for lower structural weight. The helicopter is powered by a pair of Safran Ardiden 3G turboshafts.